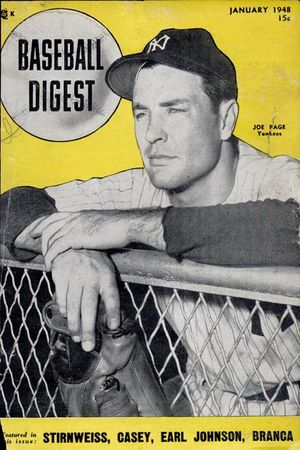 Although Joe Page finished fourth in the MVP voting in 1947, he actually got 7 first-place votes, finishing very close behind his teammate Joe DiMaggio who had 8.

In 1949 Page set the single-season saves record with 27. He was the unofficial World Series MVP in 1949.

He left school to work in the coal mines near Pittsburgh, PA at a young age. He was pitching in the city's amateur league and working in an aluminum factory when he was first signed by the New York Yankees in 1940. His career had almost ended before it started, as he was in a serious automobile accident in 1936 and almost lost a leg, needing a five-month hospital stay to recover form a compound fracture. That injury led to his being classified as 4-F and ineligible for the draft during World War II. Thus he continued to play minor league ball during the War years and in 1944 made his way to the Yankees.