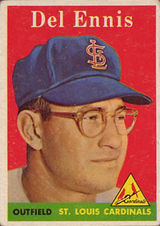 Del Ennis (June 8, 1925 - February 8, 1996) was an left and right fielder who played most of his career for the Philadelphia Phillies. During his career from 1946 to 1959, he had more RBI (1284) than any other major leaguer except Stan Musial over the same stretch; in 1950 he led the National League with 126 RBI as the Phillies won their first pennant in 35 years. He held the Phillies career record of 259 home runs from 1956 to 1980, and ranked 10th in NL history with 1824 games in the outfield when his career ended. He was an RBI specialist and ranked in the top ten RBI producers each year in the NL during the late 1940s and 1950s.

Ennis was born in Philadelphia, Pennsylvania, and was signed by scout Jocko Collins out of Olney High School in 1942. He broke into the major leagues with the Phillies in 1946 after one season in the Interstate League in 1943, followed by naval service in the South Pacific in World War II. After being discharged from the Navy on April 5, 1946, and eleven weeks after his debut, Ennis became the first Phillies rookie ever to make an All-Star team. He also became the first Sporting News Rookie Award winner, and finished eighth in the MVP voting after batting .313 with 17 home runs and 73 RBI and placing second in the NL in slugging average (.485) behind Musial.

Ennis showed his power in 1948, driving in 95 runs with 30 home runs – a Phillies record for right-handed hitters, breaking Gavvy Cravath's 1915 total of 24. A year later, in 1949, he hit .302 with 25 homers and 110 RBI, and he finished second in the NL in doubles both seasons. But his most productive season came in 1950, when he hit .311 with career highs of 31 home runs and an NL-best 126 RBI; the 31 HRs were the team record for right-handed hitters until teammate Stan Lopata hit 32 in 1956. As a member of the 1950 team dubbed the "Whiz Kids", he helped the Phillies to win their first pennant since 1915 in an exciting finish that saw Philadelphia beat out the powerful Brooklyn Dodgers on the last day of the season. But the team was swept in the World Series by the New York Yankees, with Ennis hitting only .143 with no RBI. Ennis placed fourth in the MVP voting, won by teammate Jim Konstanty that year.

From 1952 to 1955, Ennis produced four 20 HR-100+ RBI seasons, with highs of 29 and 125 in 1953. He was also named to two more All-Star Games, in 1951 and 1955. In 1956 he passed Chuck Klein to become the Phillies' all-time home run leader, and he held the record until Mike Schmidt passed him in 1980. Also in 1956, he broke Ed Delahanty's record of 1544 games with the Phillies; Richie Ashburn broke his record in 1958. By the end of the 1956 campaign he was also among the NL's top ten career home run leaders, though he dropped out of the top ten before his career ended. Traded to the St. Louis Cardinals before the 1957 season for Rip Repulski, Ennis responded with a .286 average, 26 home runs and 105 RBI, the latter being second in the NL behind his now-teammate Musial. In his first game as a Cardinal at old Connie Mack Stadium, Ennis received a standing ovation from the fans who used to boo him as a Phillie.

The story of Del and the abuse he endured from Philadelphia fans in 11 seasons has obscured his statistics (which are stellar) and also his memory. The taciturn Ennis, not given to introspection, shrugged off the abuse. Eventually, he won his "war with the wolves" in old Connie Mack Stadium. As an example, in 1954 in the second game of a doubleheader with the Cards, Del dropped an outfield fly with the bases loaded and all three runners scored. In the bottom half of the same inning with two on and two out, he hit the first pitch on the roof in left at Connie Mack and the Phils won by a score of 6-5. Ennis' career ended with a mid-season release by the Chicago White Sox in 1959 after he had been acquired from Cincinnati right after spring training. In the first eleven games that he played with the Sox, Del drove in seven runs including a game-winner in mid-May in Yankee Stadium. In fact, Ennis had four game-winning hits in six games in early 1959 and the Sox went on to win the AL pennant that year. To make room on the roster for Norm Cash who completed his service commitment, Del Ennis was waived by the White Sox in mid-June. That ended a productive career that spanned fourteen years from the postwar 1946 season to the end of the 1950s.

Larry Doby, Ralph Kiner, and Enos Slaughter are all in the Hall of Fame and belong there. Ennis' career stats are the equal of these players yet his votes for entry are paltry. This player's career needs to be reviewed by the Veterans Committee for the future as he has been all but dismissed by voters. When Del came to bat in old Connie Mack, the fans knew that a game could be altered quickly because of his ability to drive in runners on base. The expectation was always there and pitchers in the 1950s knew he was a dangerous hitter as did the Philadelphia fans despite the booing that Del received.

Ennis died in Huntingdon Valley, Pennsylvania at 70 years of age from complications of diabetes. He was buried in Hillside Cemetery, Roslyn, Pennsylvania.

"I really didn't expect to stay with the Phillies but they had to give me a 30-day trial because I was on the National Defense List. I never had spring training [in 1946] and I pinch-hit in Pittsburgh in my first game, then I got into the starting lineup. In my second game in left field, I hit a bases-loaded double to beat the Pirates. A few days later in Chicago against the Cubs, I hit two homers in one game"

Ennis used to treat his bats with great care:

"I used to hang out at a gas station called the Gas House. I used to take home a dozen bats at the end of each year. I would fill up one of those big drums with linseed oil and leave the bats in the drum all winter. They would get to be about 40-42 ounces and when I got to Florida for spring training, I put the bats in the dryer where they dried uniforms. That would get them down to about 36 ounces, and make them harder. Andy Seminick and I used the same bat all year in 1950 when we won the NL pennant."