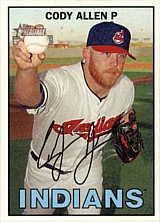 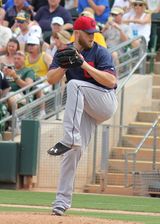 Pitcher Cody Allen made the majors one year after being a 23rd-round draft pick. He is the all-time saves leader for the Cleveland Indians.

Allen was All-Conference all four years in high school and was a quarterback on the football team. As a college freshman at the University of Central Florida, he was 2-1 with a save and a 4.58 ERA while fanning 45 in 39 1/3 innings and walking 12. He redshirted as a sophomore, then had a 3-4, 4.48 record for St. Petersburg Junior College in 2010. He was selected by the Cleveland Indians in the 16th round of the 2010 amateur draft but did not sign. Transferring again, he went 4-6 with a 3.12 ERA and 89 strikeouts in 83 2/3 innings for High Point University in 2011. He was second in the Big South Conference in strikeouts and second-team All-Conference.

He was called up by Cleveland in July 2012 to replace Scott Barnes and made his big league debut July 20th, hurling a scoreless inning of relief against the Baltimore Orioles. He relieved Derek Lowe in the midst of a 10-2 rout, entering with a 7-1 deficit, a man on and no outs in the 4th. He began on a rough note, walking Matt Wieters and Wilson Betemit. Chris Davis grounded in inherited runner Adam Jones. Allen recovered to fan Mark Reynolds and get Ryan Flaherty on a grounder. Esmil Rogers replaced him to begin the 5th. He spent his first two seasons, 2012 and 2013, as a set-up man, pitching 27 and 77 games with ERAs of 3.43 and 2.72. he made his first postseason appearance in the 2013 Wild Card Game, pitching a third of an inning in Cleveland's loss to the Tampa Bay Rays.

Allen was in the same role at the start of the 2014 season with John Axford being used as the closer, but when the latter struggled, Allen was given a chance to close games and grabbed a firm hold of the role. He saved 24 games that season after collecting just 2 in his first 2 years and went 6-4, 2.07 in 76 appearances. In 2015, he led the American League with 58 games finished and recorded 34 saves while going 2-5, 2.99. In 2016, there were some questions as to whether he would remain the closer when higher profile Andrew Miller was acquired in a mid-season trade, but manager Terry Francona did not displace him. instead, he used all three of his top relievers (Allen, Miller and Bryan Shaw) to shut down the back end of games, with Allen getting most of the save opportunities. The Indians won the division title that season as Cody went 3-5, 2.51 with 32 saves. He did not give up a single run in the postseason as Cleveland made it all the way to Game 7 of the World Series, losing in excruciating fashion to the Chicago Cubs. He made 10 appearances during the three rounds, logging 13 2/3 innings and allowing 8 hits and 5 walks while striking out 24 batters, earning 6 saves. It was Miller who received the most media attention because of the unusual usage he was given by Francona, but Allen was just as important to the team's deep run.

In 2017, Cleveland repeated as division champion, and Cody went 3-7, 2.94 with 30 saves in 69 games. He allowed his first postseason runs in Game 5 of the Division Series against the New York Yankees on October 11th. He had kept a clean sheet in his first three appearances, but in the decisive game, he relieved Shaw with Cleveland trailing 3-2 with two outs in the 8th. After striking out Greg Bird to end that inning, he was touched for a pair of runs in the 9th on a two-out single by Brett Gardner, coupled with an error by right fielder Jay Bruce. Those runs put the game out of reach as Aroldis Chapman set down the Indians in the bottom half to end their season. On July 4, 2018, Cody recorded the 140th save of his career. It was significant because it moved him past Bob Wickman for most in franchise history; Wickman had held the record since 2006. Overall, 2018 was a tough season for Allen. With Shaw gone and Miller missing a good chunk of time, often leaving him alone at the back end of the bullpen, he went 4-6, 4.70 in 70 games with 27 saves, giving him 149 for his Indians career. Things were even worse in the postseason, as in two appearances in the Division Series against the Houston Astros, he gave up 6 runs in a lone inning of work. Allen's 149 saves with the Indians is the most in franchise history.

He became a free agent after the 2018 season and on January 17, 2019, signed a one-year deal with the Los Angeles Angels worth $8.5 million. His stay in L.A. was anything but successful, as he went 0-2, 6.26 in 25 games, with 4 saves. On June 15th, he was designated for assignment. He was then released on June 18th after the Angels unsuccessfully tried to find a trade partner and on June 22nd, he was signed by the Minnesota Twins, who gave him a minor league contract. On deadline day, July 31, the Twins released him without giving him a big league look. He signed a minor league pact with the Texas Rangers for the 2020 season but failed to make the team and with the minor leagues shut down because of the coronavirus pandemic, did not pitch anywhere that season. Unable to find another team, he announced his retirement when spring training opened in 2021.