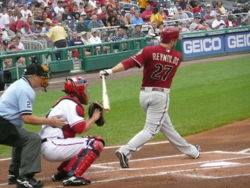 With an incredible propensity to strike out in over 35 percent of his official plate appearances, Mark Reynolds debuted in the majors in 2007 with the Arizona Diamondbacks. In 2008, he set an all-time record for most strikeouts in a season and then shattered it in 2009, becoming the first to whiff 200 times in a season. He eclipsed the 200 strikeout mark three times, with a high of 223 in 2009, and barely missed another when he had 196 in 2011 and led the American League in the category after moving to the Baltimore Orioles. However, after that early flurry of whiffs, he fell down to more manageable numbers in his last 8 seasons, with a high of 175. He is one of only a handful of players to hit 250 or more home runs and never make a big league All-Star team.

Mark debuted professionally in 2004 with the Yakima Bears and batted .274/.372/.517 for them with 58 runs in 64 games. He tied Joe Koshansky for the Northwest League lead with 3 intentional walks. Though a fine season for the then-shortstop, he failed to make the NWL All-Star team; Asdrubal Cabrera was the player chosen at SS. He struggled in brief stints with the South Bend Silver Hawks and Lancaster Jethawks, going a combined 2 for 27. In 2005, Reynolds hit .258/~.321/.454 with 19 home runs for South Bend.

Reynolds had a big year in 2006. He batted .337/.422/.670 with 23 HR and 77 RBI in 76 games for Lancaster before being promoted to the Tennessee Smokies, where he hit .272/.346/.544 in 30 games. Overall, his batting line was .318/.401/.633 with 31 HR and 98 RBI. He was third in the California League in homers and tied Joe Koshansky for fifth in the affiliated minor leagues. Reynolds was second in the affiliated minors in slugging percentage and OPS, trailing only Kevin Kouzmanoff in both. He was second in the Diamondbacks chain in RBI and led in homers and slugging. He made the California League All-Star team at third base. Baseball America named him the league's 13th-best prospect, between Sean Rodriguez and Ben Harrison.

Reynolds joined Team USA for the Americas qualifier for the 2008 Olympics and hit .320/.393/.800 with a team-high 4 homers; he scored 8 and drove in 11 while playing second base, third base and left field. He tied five others, including Yulieski Gourriel, for the most home runs in the tournament, and helped the US advance to the Olympics, something they had failed to do in 2004.

In the Arizona Fall League in 2006, he hit .327 and slugged .564 for the Scottsdale Scorpions. He was fifth in slugging, tied for fourth in home runs (5) and was second with 26 RBI; only Chip Cannon had more. Reynolds was rated as the AFL's #16 prospect by Baseball America, between Neil Walker and Nolan Reimold.

Mark opened 2007 with the Mobile BayBears and batted .306/.394/.537 in 37 games before being jumped straight to the majors to replace the injured Chad Tracy. In his major league debut, Reynolds hit 7th and played third base. He flew out to CF Willy Taveras while facing Aaron Cook in his first at-bat but then had a walk, single, double and two RBI in his next three plate appearances but Arizona still lost, 5-3. He hit .279/.349/.495 with 17 HR in 111 games in his rookie season. By August, he was often hitting fifth in the line-up. He hit two home runs in the postseason, one against the Chicago Cubs in the NLDS, and another against the Colorado Rockies in the NLCS, although he only hit .154 in the two series combined.

Reynolds was John Smoltz's 2,913th strikeout victim with the Atlanta Braves, allowing Smoltz to break Phil Niekro's franchise record. It came during a rough stretch for Mark, part of an ignominious streak in which he tied the MLB record for consecutive strikeouts by a position player, 9. He struck out against Manny Acosta on August 18th, twice against Smoltz on August 19th, 3 times against Yovani Gallardo and once against Carlos Villanueva on August 20th and twice against David Bush on August 21st. He ended the streak when he was hit by a pitch from Bush in the 6th inning. The previous position players with nine straight Ks were Adolfo Phillips (1966), Steve Balboni (1984), Eric Davis (1987), Reggie Jackson (1987) and Bo Jackson (1988).

But this strikeout record was only a hint of what was to come. In 2008, Reynolds was the starting third baseman all season for the Diamondbacks and set an all-time record for strikeouts with 204, breaking the mark set the previous season by Ryan Howard, and marking the first-ever season in which a batter had struck out more than 200 times. In spite of the strikeouts, he showed good power, belting 28 doubles and 28 home runs and driving in 97 runs, but the lack of contact depressed his batting average to .239. He still had a .320 OBP and .458 slugging percentage, leaving him with a respectable 96 OPS+.

Reynolds had a bounce-back season with the Orioles in 2011, with his average improving to .221, with 27 doubles, 37 homers, 84 runs and 86 RBI. For the fourth straight year, he led his league in strikeouts, racking up 196. Late in the season, he was moved from third base to first base after first-half starter Derrek Lee was traded away in mid-season. He played mainly first base in 2012, although he had to share playing time with a very similar player, Chris Davis, another low-average slugger who racks up more than his share of strikeouts. As a result of his more limited playing time, his power numbers were down, but he had a great week-end series at New Yankee Stadium as the Orioles were unexpectedly in the race for a postseason spot, hitting 2 homers on August 31st, and two more on September 2nd as the Orioles won two out of three to move to within two games of the New York Yankees. He finished the season with 23 homers and 69 RBI in 135 games, to go along with a .221 average, 73 walks and 65 runs scored. The Orioles did make the postseason for the first time in 15 years, but he went 0 for 3 in the Wild Card Game against the Texas Rangers and 3 for 19 with no extra-base hits as the Birds lost to the Yankees in the ALDS.

Reynolds signed as a free agent with the Cleveland Indians in 2013. Splitting his time between first and third base, he was having a typical season by his standard - .215 with 15 homers and 48 RBIs in 99 games, with 123 strikeouts, when the Indians designated him for assignment on August 8th. What the numbers hid was that he had hit 13 of the 15 homers in April and May, and had since lost his power stroke completely. His month of July was particularly horrific, with an average of .098 (5 for 51) with 1 RBI. On August 15th, it was reported that he had signed with the New York Yankees, who had struggled all season to find production from their corner infielders. He bounced back to some degree with the Yankees, hitting .236 with 6 homers and 19 RBIs in 36 games. In 2014, he moved to the Milwaukee Brewers where he was the starter at first base, and also filled in for 3B Aramis Ramirez when he was unavailable. He hit only .196 in 130 games, buy did connect for 22 homers, although those netted him only 45 RBIs. On December 11th, he signed a contract with the St. Louis Cardinals. With Matt Adams struggling with injuries in 2015, he played 140 games for the team that compiled the best record in the majors, hitting .230 with 13 homers and 48 RBIs. However, he only received 4 at-bats in the postseason as the Cardinals were upset by the Chicago Cubs in the Division Series; he went 0 for 4 with a strikeout.

Reynolds finally found a bit of stability when he signed with the Colorado Rockies in 2016. He played 118 games, hit .282 - a personal best - and struck out only 112 times, a low rate by his standards. Even better, he got those numbers without really sacrificing much power as he slugged 24 doubles and 14 homers. Given he played his home games at Coors Field, this only netted him an OPS+ of 101, but it still made him valuable. He re-signed with the Rockies in 2017, with the understanding that he would likely be a part-time player, but a spring training injury to prospective 1B Ian Desmond during spring training put Mark back in the starting line-up to start the season. The Rockies went 9-5 over the first two weeks - the best record in the National League - and he was their most productive hitter, with 4 homers and 11 RBIs during that stretch. He played 148 games that year, hitting .267 with 30 homers and 97 RBIs, his first time hitting the 30-homer mark since 2011. He kept the first base job after Desmond returned, given he was hitting so well, and started the Wild Card Game at first base against the Arizona Diamondbacks on October 4th. He went 0 for 3 but drove in a run on a ground out before being replaced by Desmond during a double switch in the 6th inning. The Rockies lost the game, 11-8.

In 2018, he was one of numerous players left on the sidelines during spring training because of a slow free agent market. He only found a team on April 17th, when the Washington Nationals gave him a contract and sent him to AAA. He was in effect an insurance policy for an insurance policy, as Ryan Zimmerman was the starter at first base and Matt Adams had been signed earlier to be a back-up. However, when Zimmerman went on the disabled list on May 12th, Reynolds was called up and in his first start the following day he hit a pair of home runs in a 6-4 win over one of his former teams, the Diamondbacks. On July 7th, he tied the Nats' club mark by driving in 10 runs in an 18-4 win over the Miami Marlins. He hit a two-run homer off Wei-Yin Chen in the 2nd, hit a two-run double in the 4th and a run-scoring single in the 5th; in the 6th, he added a three-run homer, and finished off his day with another single in the 8th, this one good for two runs. His big day came one day after hitting a pinch walk-off homer against those same Marlins. He played 86 games and hit .248 with 13 homers and 40 RBIs. The Nationals liked his contribution enough that they traded away Matt Adams at the deadline.

Continuing his endless travels, Reynolds signed a minor league contract back with the Rockies in January 2019. It came with an invitation to spring training. He made the team and played 78 games, hitting just .170 with 4 homers and 20 RBIs as age was catching up with him now that he had turned 35. He played his last game on July 19th and was handed his release on July 26th. He did not retire immediately but the following April 9th, with baseball shut down by the coronavirus pandemic, he officially announced his retirement. The news came in an interview with MLB Network Radio when asked if he was looking for a team in these unusual times; he explained that he had actually decided to retire a while back, but just hadn't told anybody. In all, he played 1688 games over 13 seasons, hitting 236 with 298 homers, 871 RBIs and 1927 strikeouts. He also made two appearances as a pitcher. His strikeout total placed him #9 on the all-time list at the time of his retirement, and everyone ahead of him had played more seasons.