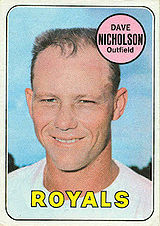 Dave Nicholson struck out 175 times in 1963 while playing for the Chicago White Sox, the most in the American League. It was the major league record at the time, besting Harmon Killebrew's 142 whiffs the year before, but it would be exceeded repeatedly in subsequent years. On May 6th that year, he hit a ball that almost cleared Comiskey Park's left field roof on the fly. It came off Moe Drabowsky of the Kansas City Athletics in the first game of a doubleheader, on a day when he hit 3 of his 22 home runs of the season. The White Sox claimed that the ball had reached the street outside the ballpark on the fly, but accounts from fans in the upper deck seats soon disproved that, as they heard the ball bounce on the back of the roof above their heads before falling to the street. It was still a prodigious blast of around 500 feet.