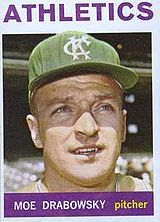 Pitcher Moe Drabowsky played for eight clubs over a seventeen-year career. He appeared in the 1966 World Series and the 1970 World Series.

He was born in Poland and as a young boy came to the United States. He signed with the Chicago Cubs for $75,000 in 1956 and made his big league debut that year. 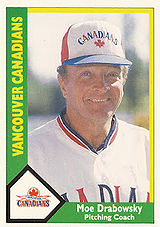 In 1969, he joined the expansion Kansas City Royals and became their first pitcher to win a game.

Off the field, Drabowsky earned a reputation as a practical joker and clubhouse prankster.

After his playing career ended, he was a coach with the Chicago White Sox in 1986 and with the Chicago Cubs in 1994. He was a minor league pitching instructor for the White Sox and the Baltimore Orioles for over a decade, until a few weeks before his death, living in Sarasota, FL. He was a coach for the Birmingham Barons in 1987-1988, Vancouver Canadians in 1989-1991, Hagerstown Suns in 1992, and Delmarva Shorebirds in 1999. He also served briefly as the interim manager of the Vancouver Canadians of the Pacific Coast League in June 1991. As the team's pitching coach, he replaced manager Marv Foley on June 15th and his team lost all three games under his direction. He ceded the reins to base coach Doug Mansolino on June 17th, who ceded them in turn to Rick Renick on June 22nd. The Canadians finished last during that difficult season. He had another brief stint as an interim manager for the Bowie Baysox in 1996.

Drabowsky died of cancer in 2006 at age 70, at the University of Arkansas Medical Center in Little Rock, AR.

He is by far the most prominent major league player to come out of Trinity College in Hartford, CT.