The Chapman beaning was the fatal beaning of Ray Chapman by Carl Mays on August 16, 1920. The beaning had important historical results and was the only time in Major League history that a player was fatally injured in the course of the game.

1920 was an important year of transition in baseball, the end of the Deadball Era and the beginning of the big hitting Babe Ruth era of the 1920s and 1930s. A key feature of the Deadball Era was the use of the spitball and other defaced ball pitches. Through the 1919 season, pitchers were generally allowed to throw the spitball, and umpires were extremely lax in enforcing rules against defacing the baseball.

That was supposed to change in 1920. The majors enacted much stricter penalties against defacing the baseball and restricted the use of the spitball to no more than 2 designated spitball pitchers per team. Despite these precautions against deliberate manipulation of the ball, the majors were still tight fisted in the use of new baseballs. Umpires allowed balls to continue in use when they had become discolored from ordinary use, replacing them only when they had been obviously damaged. The tragic shortsightedness of the policy became obvious on August 16. 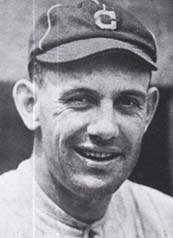 1920 saw the Cleveland Indians, Chicago White Sox, and New York Yankees locked in a tight three way battle for the American League pennant. On August 16, Cleveland was tied with Chicago and just half a game ahead of New York when the Indians went to start a series against the Yankees at the Polo Grounds.

With the Indians leading 3-0, Chapman led off the 5th inning. As was his custom, he leaned in toward the plate. Mays, a submarine pitcher threw a pitch that started from near his shoetops and went inside. Chapman didn't move and was hit squarely on the head.

The ball ricocheted so hard that Yankees third baseman Aaron Ward fielded it and threw to first in the mistaken belief that it had hit Chapman's bat. Generally, such a ricochet would indicate that the blunt force energy of the pitch hadn't been absorbed by the batter, which is a good sign, but Chapman collapsed, bleeding profusely. He recovered enough to walk off the field with the assistance of his teammates. The shaken Indians held on to win the game 4-3.

Due to the large number of requests for seats in the church, it was decided to hold the funeral services in St. John's Catbedral. Chapman will be later be buried there in a private service, consisting of solemn high requiem mass at 10 o'clock with the sermon by Reverend Dr. WA. Scullen, chancellor of the Cleveland diocese. Among the pallbearers were Tris Speaker, Manager Steve O'Neill and Joe Wood of the Cleveland Indians and former player Tom Rafferty. His ball club also attended the funeral. Twenty thousand, six hundred and twenty-three persons donated ten cents each toward the "flower from a fan" fund. A floral casket with 2063 flowers was purchased, and all money left over was turned over to the "Ray Chapman Memorial Fund" committee. See [1].

After Chapman died early in the morning of August 17, and the game scheduled for that day was postponed in his honor. The Indians, who had recently suffered their worst losing streak of the season, went on to lose 7 of their next 9 games and fall 3 1/2 games behind the league leading White Sox. Despite expectations that they would fold, the Indians went on a late-season tear, going 22-8 in September and October to win the pennant and eventually the World Series. A key to their success was their callup of rookie shortstop Joe Sewell, who hit .329 in 22 games as a replacement for Chapman.

Players from other teams called for Mays to be banned from the game, which the authorities wisely refused to do. While he had a reputation as a headhunter, there was no indication that Mays had done anything wrong. The pitch was at least close to the strike zone, and some observers claimed that it was actually over the plate when Chapman was hit. The general conclusion was that Chapman had lost sight of the pitch and frozen, with tragic consequences. Although he was held blameless, Mays's reputation suffered a serious blow- one that he did nothing to help by continuing to advocate a pitcher's need to throw inside.

The most important long term consequence of the beaning was a change in the policy on replacing used balls. The immediate culprit in Chapman's death was held to be the ball itself, which had been darkened by use and become difficult to see. Umpires were instructed to replace used balls whenever they were damaged or darkened in any way. In addition to the intended effect of making it easier for batters to avoid being hit by pitches, this decision also made it easier for the batters to hit the ball, materially contributing to the offensive boom of the 1920s.