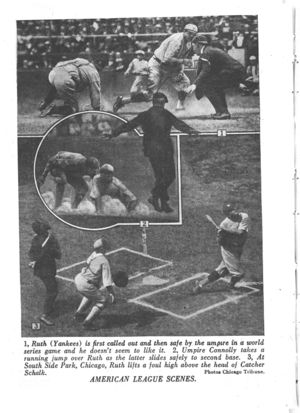 Various scenes of the Babe in action.

The 1921 New York Yankees played their 19th season in New York and their 21st overall. Theym finished with a record of 98-55, winning the first pennant in franchise history, winning the American League by 4 1/2 games over the previous year's champion, the Cleveland Indians. New York was managed by Miller Huggins. Home games were played at the Polo Grounds.

With star slugger Babe Ruth hitting 59 home runs, setting a new major league home run record for the third consecutive year, while also having probably his greatest overall season statistically, the Yankees appeared to be the team to beat in the World Series. Their landlords, the New York Giants, had rebuilt after slipping a bit in the late 1910s, and had won the National League pennant. For the first time, all the games of a World Series would be held in the same ballpark. The best-of-9 Series (the last played under the format before returning to the best-of-7 format) saw the Yankees take a 3 games to 1 lead, but Ruth suffered a serious injury that took him out of the remaining games, save for one pinch-hitting appearance, and the Giants rallied to win the Series, 5 games to 3.