Hall of Famer Hughie Jennings was both a top player and a successful manager. As a player he hit .311 over a 17-year major league career and frequently led the league in hit-by-pitch. In a 16-year career as a major league manager, he was most famous for leading the Detroit Tigers during the time of Ty Cobb and Sam Crawford.

"No one compared with Hughie as a shortstop." - Honus Wagner

Hughie Jennings was born in a family of twelve children and grew up near the anthracite coal pits near Scranton, PA. He dropped out of school at 12 to start work in the mines but also played baseball in Moosic, PA, where he was mostly a catcher. He began to play semi-pro ball in 1890 and reached the majors with the Louisville Colonels of the American Association in 1891. He spent parts of three seasons with the club, putting up unspectacular numbers, until he was traded to the Baltimore Orioles. He quickly developed into a star with Baltimore, playing shortstop under manager Ned Hanlon and leading the team to three pennants in his first three years with the club. He became the Orioles captain and hit over .300 in each of five full seasons with them. In 1895, he scored 159 runs and drove in 125, and in 1896, he hit .401 while being hit by pitches 51 times (he had originally been credited with 49 hit by pitches that season, a total surpassed by Ron Hunt in 1971; however, later research uncovered two more HBP's, giving him the record again).

In 1896, Jennings drove in 121 runs without hitting a single home run - the record for most RBI in a season without hitting a homer. He was a close friend of John McGraw on the Orioles, and the two of them sought to remedy their lack of formal education by taking classes in the off-season. Jennings eventually attended Cornell Law School, and while he fell a few credits short of a degree, he was able to pass the bar exam and become a practicing lawyer. He practiced law in the off-seasons and built up an extensive clientele, becoming quite well off.

During the course of his career, Jennings had his skull fractured three times by pitches. The most serious incident saw an Amos Rusie pitch knock him unconscious for four days in 1897. He suffered another serious injury in 1904, when he decided to go for a swim in Cornell's indoor pool; he did not notice that the pool had been drained for maintenance and dove right in [1]. This unfortunate accident became known throughout baseball, and in later years if he would chide a player for making a stupid play, the player would often reply "at least I never dove into an empty pool". In 1899 he was transferred to the Brooklyn Superbas; early that season an arm injury derailed his major league career, forcing him to move to first base. Brooklyn unsuccessfully attempted to trade him to the Colonels for Honus Wagner, but Jennings notified the Louisville club of his injury. When he came back from his injury he became an outstanding fielder at first base for Brooklyn, and was on two more pennant winners. In 1901 he played one more season at first base for the Philadelphia Phillies. He played in the minors for several years before coming back to the majors as a manager. While a big league skipper, he also played in a handful of games, with his final playing appearance coming as a 49-year-old in 1918.

As a player, Jennings had great range at shortstop and was a good hitter, ranking in the top 100 of all-time for batting average, on-base percentage, and stolen bases. Not satisfied with just hits and walks, he also is the all-time leader in hit-by-pitch (Craig Biggio ended his career in 2007 with two fewer than Jennings). 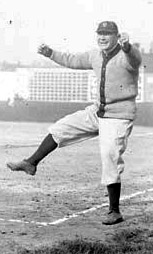 Jennings took over as player-manager with the minor league Baltimore Orioles early in 1903, at the invitation of Ned Hanlon who was the team's owner. He managed the team for four years. Jennings returned to the majors as manager of the Detroit Tigers in 1907. Tigers owner Frank Navin first sought to make a deal with Hanlon, but the latter asked for $5,000 to release his manager. Unmoved, Navin decided instead to draft Jennings as a player, for the fixed price of $1,000. With stars Ty Cobb and Sam Crawford in the lineup, Jennings led the team to pennants in his first three years at the helm, a feat later only matched by Ralph Houk. He remained with the Tigers through 1920, consistently finishing above .500 with lineups featuring Cobb, Crawford, and Harry Heilmann. He was replaced as the team's skipper by Cobb. In 1911, he suffered another serious incident when the car he was driving slipped and overturned while he was crossing the Lehigh River; he suffered two broken legs and a broken arm and a head injury while narrowly escaping drowning.

In 1921, Jennings joined the coaching staff of the New York Giants under manager John McGraw, his teammate with the Orioles in the 1890s. He also filled in for McGraw as skipper for parts of 1924 and 1925, when McGraw was fequently absent with sinusitis and other ailments, winning the pennant in 1924.

Jennings earned the nickname "Ee-Yah" while a manager, because he would often scream "ee-yah!" whenever the Tigers or Giants scored a run or even just got a hit. He also claims to have coined the term "Attaboy!", a contraction of "That a Boy!", another cry of encouragement. He was often shown in pictures with both fists pumped, one leg in the air and his mouth opened, uttering his famous rallying cry.

Prior to his big league managerial career, Jennings was the first baseball coach at the University of Georgia from 1895 to 1899, leading the team in the off-season. He also coached St. Bonaventure University. He also umpired a total of three National League games, one in 1893 and two in 1900.

Jennings was diagnosed with tuberculosis following the 1925 season, and was unable to rejoin the Giants in 1926. He made his last public appearance in July 1927, when the Giants celebrated McGraw's 25 years as manager. He contracted meningitis over the next winter and died at home in Scranton on February 1, 1928. He was elected to the Hall of Fame posthumously in 1945.