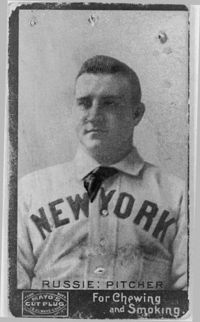 Amos Rusie was one of the dominant pitchers of the 1890s. He won at least 20 games in each of eight seasons playing with the New York Giants, and he notched 36 wins in 1894. He was also the hardest-throwing pitcher of his generation, resulting in his leading the National League in strikeouts five times between 1890 and 1895; however, he may have thrown hard, but he did not alway know where: he walked over 200 batters in a season five times, leading the league each year from 1890 to 1894. In addition, he once struck Hughie Jennings with a pitch that knocked him unconscious for four days.

When the Giants tried to cut his salary in 1899, he sat out for two seasons. He was traded to the Cincinnati Reds in 1901 in what is considered one of the most lopsided trades in baseball history. Rusie went on to retire after three games with the Reds. The player the Reds had traded, Christy Mathewson, won 372 games in 17 seasons with the Giants.

Rusie and Dan Brouthers served as night watchmen at the Polo Grounds after they retired from playing baseball. Before that job, Rusie had worked for ten years in Seattle, WA as a steamfitter, and later in life he returned to Seattle, where he eventually died.

Rusie was a forgotten man by the time the BBWAA started Hall of Fame voting in the 1930s. He never received more than 3% of the vote from them. He was eventually elected by the Veterans Committee in 1977.

He was inducted into the Indiana Baseball Hall of Fame in 1979.

It's said that he was originally discovered pitching semi-pro ball in Indiana by Jack Glasscock, who served as manager for the 1889 Indianapolis Hoosiers part of the season and signed Rusie.

"Words fail to describe the speed with which Rusie sent the ball. ...It was like a white streak tearing past you." - Jimmy Ryan, Chicago outfielder, 1894