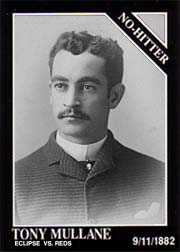 Anthony John Mullane
(Count or The Apollo Of The Box) 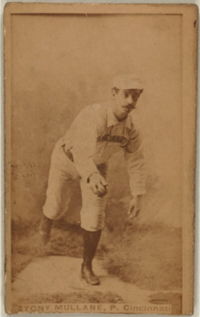 Tony Mullane was one of the very few ambidextrous pitchers in the history of the game. In a game in July 1882, he pitched with both hands, though not at the same time. He might have done this on other occasions; the July incident is the most widely documented one. A handsome man, Mullane was nicknamed "The Apollo of the Box." Teams would often schedule Mullane on "Ladies' Day" promotions to drum up business on otherwise quiet dates on the schedule.

Mullane was known for being cheap and often wore clothes till they became very raggedy.

Mullane is 2nd all-time in wins among pitchers not enshrined in the Hall of Fame who are eligible. Only Bobby Mathews is ahead of him. He might have won 300 if not for a suspension he served that kept him out all of 1885. Mullane is the all-time leader in wins by an Irish pitcher; only Blyleven won more among non-Americans. Canadian Ferguson Jenkins won as many.

A fine hitter as well as a great pitcher, Mullane played over 250 games at other positions to keep his bat in the lineup. His 661 career hits are tops among pitchers.

In 1884, Mullane won 36 games for the Toledo Blue Stockings. The Cincinnati Reds signed him but due his being on 4 teams in the prior 4 years, the American Association punished him for jumping from team to team. He was prohibited from playing in 1885. Despite missing the season, Mullane won more games than any pitcher in AA history and also pitched the most shutouts in the AA.

Mullane is also known for his racism. His catcher in 1884 was sometimes Fleet Walker. Mullane admitted to purposefully mixing up Walker by throwing pitches the catcher hadn't called for. When he did admit this, Mullane also called Walker the best catcher he ever worked with.

He worked as an umpire in the American Association fro three games in 1888 and in the National League for one game each in 1893 and 1897. He also umpired in the minor leagues.

Following his baseball career, Mullane was a longtime member of the Chicago Police Department, serving as a detective for many years.

Mullane's name was on the 2013 Hall of Fame ballot in which the Veterans Committee examined candidates from the pre-integration era.

Main source: "The Beer and Whisky League" by David Nemec