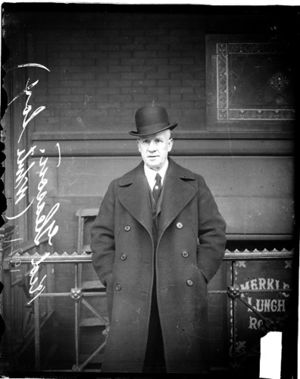 Gleason shown in Chicago in 1921

The brother of Harry Gleason, Kid Gleason is often remembered only as the manager of the Black Sox in 1919. However, he played 22 years in the major leagues, including eight as a pitcher. As a pitcher he won 138 games, winning 38 in 1890. As a hitter he had nearly 2,000 hits and led the league twice in sacrifice hits. As a position player he was primarily a second baseman, appearing in 1583 games at that position.

Gleason's biography done as part of the SABR BioProject is rife with errors. For instance, it credits Gleason with inventing the intentional walk while with the Giants between 1896 and 1900, although the intentional walk was used in the 1880s, and Bill Deane has been unable to verify any 19th Century bases-loaded intentional walks. For another, it says Gleason "believed in preseason conditioning long before the popularity of spring training". Spring training was popular, or at least common, before Gleason's career began.

At another point, it seems to be intentionally misleading, claiming that Gleason struck out only 131 times in his career, when in fact that is his total through 1896, the last year in his career that the statistic was kept. Gleason walked 180 times in the same years that he struck out 131 times. Another obvious misstatement is found in here: "Gleason played a pivotal role in building an obscure franchise into a three-time world championship team", referring to the Athletics. Besides the ridiculousness of describing them as obscure, they only won two World Series while Gleason was coaching for them.