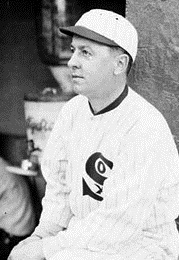 Clarence "Pants" Rowland was a minor league catcher and executive and big league umpire and scout during a long career in baseball, but he is best known as a manager who won the 1917 World Series with the Chicago White Sox.

Rowland earned his nickname during his minor league days. According to stories, he wore borrowed, oversized trousers to a game and was ribbed by teammates about it.

Rowland began his managerial career in the minors in 1903 with the Dubuque Shamrocks. After managing various teams in the Three-I League from 1911 to 1914, he was hired by Charles Comiskey on December 17th, 1914, to lead the White Sox. After finishing third in his first season at the helm, in 1915 and second in 1916, Chicago won 100 games in 1917 to capture the American League pennant. The club went on to defeat the New York Giants in six games to win the World Series, a feat a Chicago team would not accomplish again for nearly 90 years.

After a losing season with the White Sox in 1918, Rowland was let go by the team. He returned to the minors as manager and part owner of the Milwaukee Brewers in 1919. He was a scout for the Detroit Tigers in 1920 [1] and spent two years as skipper of the Columbus Senators. He was then an AL umpire from 1923 to 1927, before "he was not reappointed" for 1928 [2], likely because of his association with Ban Johnson and opposition from Cleveland and Washington. He was offered a job as umpire for the American Association in 1928, but ended up as a scout for the Cincinnati Reds. He managed the Nashville Volunteers in 1929-1930. After buying the Reading Keystones from the Chicago Cubs in December 1930 and serving as skipper, he was a Cubs' scout from 1933 to 1941.

Rowland was then General Manager of the Los Angeles Angels and was named Minor League Executive of the Year in 1943. Next, he was president of the Pacific Coast League from 1944 to 1954, during which time he pushed for the American and National Leagues to recognize the circuit as a third major league. After that, he was vice president of the Cubs in 1954 through 1955 and 1959.

In 2005, Rowland was elected to the Pacific Coast League Hall of Fame.