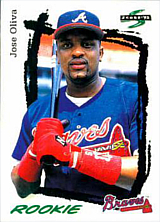 José Oliva hit over 100 homers in his professional career before his life was cut short by a tragic accident.

In 1991, he improved to .240/~.319/.415 with the Charlotte Knights, though he still whiffed 108 times in 383 at bats. Baseball America rated him the 10th best prospect in the Rangers chain. After spring training in 1992, Oliva had no way to get to Tulsa, OK for the new season, so close friend Sammy Sosa bought him a car. He produced at a .270/~.330/.467 clip, while he led the Rangers minor league organization with 136 strikeouts. He homered 16 times and cracked 28 doubles. That winter, José was traded to the Atlanta Braves for Charlie Leibrandt and Pat Gomez. Baseball America tabbed him Atlanta's 7th-best prospect.

Oliva kept on striking out in 1993 (134 K in 412 at bats to lead Atlanta's minor leaguers) but his power continued to develop as he hit 21 home runs and batted .235/~.295/.466 in his first look at Triple A; at 22, he was young for the level. José continued to improve in 1994, hitting .253/.302/.493 while cutting his strikeouts to 92 and going deep 24 times, 4th-most in the International League. IL managers voted him the 4th-best prospect in the IL, right behind Carlos Delgado and well ahead of Brian Giles. He dazzled in his major league debut, batting .288/.364/.678 with the major league Braves and crushing 6 homers in 59 at bats. Unfortunately, his season was cut short by the 1994 strike. Baseball America named him the 10th best prospect in the Atlanta chain and he made the 1994 Topps All-Star Rookie Team.

In 1995, Oliva made the Braves out of spring training when Chipper Jones (who had won the third base spot) was moved to left to fill in for the injured Ryan Klesko. After a strong start, José's production faded when Klesko returned and Oliva moved to the bench. He only hit .156/.207/.330 for the Braves thanks to a 5-for-59 skid. On August 25th, he was dealt to the St. Louis Cardinals for Anton French and hit .122/.195/.216 in 22 games for the Cards. He only managed a .142/.202/.284 line that year as his power could not compensate for an inability to connect regularly.

Moving on to the Brother Elephants of the Chinese Professional Baseball League in 1997, he batted .311/?/.626; his 25 homers almost led the league while his 81 RBI were also among the leaders. Oliva followed another fine winter ball season, hitting .286/?/.474 for Estrellas. His 8 homers and 40 RBI led the Dominican League, clearly out-slugging Batista (3/18), Miguel Tejada (3/23), Paul Konerko (5/22) and many other major leaguers.

José had a verbal agreement with the Seattle Mariners for a minor league deal. Shortly thereafter, he was driving from Santo Domingo to San Cristobal when he picked up a lady who had been waiting by the side of the road for an hour for someone to give her a hand. Oliva was not wearing a seatbelt and was thrown from his car in a single-car accident, dying at the age of 26.

Oliva was posthumously honored as the Dominican League MVP for 1997-98 and a Baseball America winter league All-Star.

José's friend, Manny Aybar, had the numbers 123 written on his cap to remember Oliva (Jose had worn that number in winter ball) while pitching for the Cardinals. San Diego Padres skipper Bruce Bochy had the umpires force Aybar to remove the cap, as it violated uniform codes.