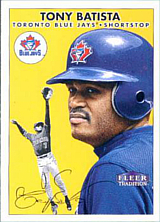 Tony Batista arrived in the major Leagues as a middle infielder, gradually becoming a feared slugger. The most remarkable thing about him was his highly unorthodox batting stance: he took his place at the very rear of the batter's box with an exaggeratedly open stance that had him almost facing the pitcher straight on; he then would take a huge step forward as the pitch was delivered, attacking the ball with all his might, but very little control. As a result, he drew very few walks and struck out often, but he also went on torrid hitting streaks when every ball he hit would head towards fences at high velocity. Sabermetricians considered him a liability at the plate because his career on-base percentage was below .300 as a result of his lack of plate discipline, but others appreciated him because his at-bats were always highly entertaining and he piled up home runs and runs batted in.

Batista started his career in the Dominican Summer League in 1991, after signing as an amateur free agent with the Oakland Athletics. He spent two seasons in the Rookie level Arizona League, but was promoted straight to the AAA Tacoma Rainiers early in 1993, where his career almost ended after four games when he broke his skull as a result of a collision in the outfield. He returned to action in 1994 with the Modesto Athletics of the Class A California League and flashed his first signs of power, belting 26 doubles and 17 home runs in 119 games. He moved to AA in 1995 and AAA in 1996 before making his major league debut on June 3 with the Athletics. He hit well enough to claim the team's starting second base job over the last month of the season, finishing his rookie campaign with a .298 average, 6 home runs and 25 RBI in 238 at bats. He was the Athletics' Opening Day shortstop in 1997, but lost the job after hitting .167 in his first 29 games. That punched him a return ticket to the AAA Edmonton Trappers, and he shuffled between Oakland and Edmonton the rest of the season, finishing the year with a paltry .202 batting average and only 4 home runs and 18 runs batted in.

At this point, Tony had done little to distinguish himself as a future star, and he was left unprotected in the expansion draft. The Arizona Diamondbacks selected him in the first round of the draft, with the 27th pick, on November 18, 1997. In the Diamondbacks' inaugural season in 1998, he started as a backup to rookie second baseman Edwin Diaz in the team's first two games, then went 3 for 4 in his first start on April 2 against the Colorado Rockies (Boxscore). That sent him on his way to be the team's regular second baseman, until he switched positions with shortstop Jay Bell over the last month of the season, as Bell no longer had the mobility to play shortstop regularly. For the season, Batista hit .273 in 106 games, with 16 doubles and 18 home runs for a solid .519 slugging percentage. He began 1999 as the team's starting shortstop and did well enough, hitting .257 with 5 home runs in 44 games, but was traded to the Toronto Blue Jays on June 12 for left-handed reliever Dan Plesac.

In terms of talent, the Blue Jays made out like thieves in this trade. Plesac was 37 years old and had become an unremarkable LOOGY in his later years, while Batista was a 25 year-old power hitting middle infielder coming into his prime. The thoroughly unremarkable, if slicker fielding, Andy Fox took over for him as Arizona's shortstop while Batista moved on to Toronto where he started every game at shortstop the rest of the way, hitting 26 home runs and driving in 79 runs in 98 games. In one of his patented hot streaks, he drove in 17 runs in his last 11 games, including a grand slam against Mike Jackson of the Indians in his last at bat of the season on October 3 (Boxscore) to reach an even 100 RBI. He moved to third base in 2000 and did even better, slugging 41 home runs and driving in 114 runs with a .263 average, earning his first trip to the All-Star Game. In a little under two seasons, he set Blue Jay team records for most home runs in a season by a shortstop and by a third baseman.

Batista was the victim of some strange roster maneuverings for the 2001 Blue Jays. On June 25, he was hitting only .207 in 72 games, but had 25 extra base hits and driven in 45 runs when the Blue Jays put his name on waivers, apparently with the aim of sending him down to AAA to work on improving his batting average. They were stunned when the Baltimore Orioles did not hesitate to claim him, swallowing the remainder of a fairly hefty contract in the process and putting him directly into the lineup. To make matters worse, Batista went 3 for 4 with a home run in his first game with his new team on June 27 against... the Toronto Blue Jays (Boxscore). This was, of course, Cal Ripken's last season for the Orioles, and he still owned the third base job. Nonetheless, manager Mike Hargrove was able to find enough playing time for Batista between designated hitter, third base and shortstop to give him 308 at bats in 84 games, during which he hit .266 with 12 home runs and 42 runs batted in. When Ripken retired, Batista slid into the third base job and represented the Orioles at the 2002 All-Star Game thanks to a red hot start that included a grand slam against Roger Clemens of the New York Yankees on Opening Day (Boxscore) and 24 RBI in April. He slugged 36 doubles and 31 home runs and drove in 87 runs in spite of a .244 batting average. With 30 of his home runs hit as a third baseman, he established a new Orioles single season mark for home runs at the position, eclipsing Hall of Famer Brooks Robinson's total of 28 for the 1964 Orioles. His average slipped even lower in 2003, to .235, but he still hit 26 home runs and drove in 99 runs. On July 18, he hit a grand slam in the first inning and a tie-breaking homer in the eighth to lead the Orioles to victory against the Anaheim Angels, 6-5.

Batista became a free agent after the 2003 season, but found few takers after two seasons hitting below .250. In January 2004, the moribund Montreal Expos offered him a one-year contract at a discount salary, after closing the book on their attempt to retain superstar Vladimir Guerrero. The year did not start very well for Batista as he contracted mononucleosis during spring training and had to be quarantined for 10 days, but when the 2004 season got rolling, he emerged as one of the team's few bright spots. Still weakened by the after affects of the disease, he began the year in a 2 for 25 slump, went 9 for 79 for the month of June, and tied a major league record on August 31 when he struck out five times in a 9-inning game against the Chicago Cubs (Boxscore). But he also drove in six runs in a game twice in a week in late July, and went through a seven-game streak in September during which he drove in 17 runs. He finished the year with a .241 average, but with 30 doubles, 32 home runs and an incredible 110 runs batted in from the cleanup spot of the Expos' batting order. He was looking for a raise and a long-term contract after that productive season, but could find no takers in the Major Leagues.

Instead, Tony signed a two-year, $15 million deal to play for the Fukuoka Softbank Hawks for 2005 and 2006. After a slow start in 2005, Batista played a role in leading the Hawks to the top record in the Pacific League; he hit .263/.294/.463 and tied for eighth in the league with 27 home runs; he was also fifth with 90 RBI, third with 29 doubles, tied for sixth with 78 runs scored and fifth with 115 strikeouts. The team likely expected better, given that he had been given one of the largest contracts in Nippon Pro Baseball; Batista did not finish among the leaders in slugging (56 points behind 10th place in the Pacific League) or OPS (110 points behind 10th place). After the season, the Hawks released Batista, eating almost $4.4 million for the 2006 season. The team stated they were going for a younger team.

Following his release, Batista signed a one year contract with the Minnesota Twins in December 2005. He struggled and was released on June 19, 2006. He batted only .236/.303/.388 with 5 home runs and 21 RBI; his playing time decreased with the ascendance of future batting champion Michael Cuddyer. Tony hit .259/.300/.667 in the 2007 Caribbean Series, winning the Caribbean Series Most Valuable Player award and leading the Series with 3 homers. The Washington Nationals signed Batista to a minor league contract on February 7, 2007, and he spent 30 games with the Columbus Clippers, batting .290/.350/.542 with 6 big flies and 22 RBI before being called up by the Nationals. He served mainly as a pinch hitter, batting .257/.347/.347 with 2 home runs and 16 RBI in 80 games (101 at bats) and his last taste of major league baseball. He signed a new minor league deal for 2008, but was released in May, ending his career.

Batista once held the Caribbean Series record for career RBI (45), only to be surpassed by former Caribbean Series teammate Miguel Tejada. He had hit .239 in the Series but given his 2007 MVP and second-place all-time in RBI standing, he made the Caribbean Baseball Hall of Fame in 2022 in a class with David Ortiz, Luís Saint-Claire and Juanchy Sánchez.