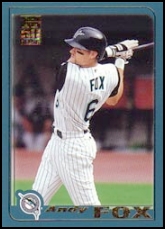 Andy Fox played every position except pitcher and catcher during his 9-year career in the majors. He had 264 games at shortstop, 169 games at second base, 135 games at third base, 81 games in the outfield (playing all three outfield positions), and a few games at first base and as a DH.

He played in the 1996 World Series as a rookie with the New York Yankees.

His last several major-league appearances came in 2004 with the Texas Rangers, whom he joined after being released by the Montreal Expos earlier that season. He had been selected by the Expos in the 2003 Rule V Draft the previous winter in what was a strange move, as veteran back-up infielders like Fox can usually be signed at no cost. The following season, he signed with the Minnesota Twins, and later that spring with the Los Angeles Angels of Anaheim, but officially retired on April 28, 2005.

After retiring, Fox spent 2006 as manager of the Clinton LumberKings of the Midwest League. In 2007 he was slated to manage the Spokane Indians in the Texas Rangers system, but on March 24th the Florida Marlins hired Fox to replace the just retired Perry Hill as first base coach and infield instructor. Fox stayed with the Marlins through the 2009 season. He then joined the Seattle Mariners organization for one year as the West Tenn Diamond Jaxx hitting coach.

The Boston Red Sox hired Fox in 2011 as their Minor League Infield Coordinator, a position he held through the 2021 season. He simultaneously served as the team's assistant field coordinator for 2019-2021. Fox returned to the major leagues in 2022 as the Red Sox Major League Field Coordinator.