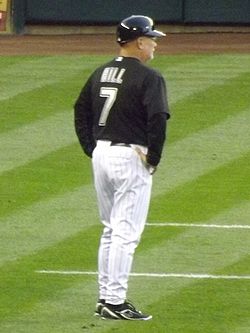 Second baseman Perry Hill played with Rio Grande Valley in the Gulf States League in 1976 and hit only .194. He then played from 1977-81 in the Mexican Sonora League.

Hill has forged himself a reputation as a fielding guru through his work with major league teams over the years. In his first year as a coach with the Detroit Tigers in 1997, the team went from worst to first in fielding percentage in the American League. Brought on board by the Montreal Expos, he worked with a team that was notoriously poor on defensive fundamentals and turned it around completely; SS Orlando Cabrera had an outstanding defensive season under his tutorship in 2001, winning a Gold Glove, the first of many won by Hill's pupils over the years. He moved to the Florida Marlins along with the entire Expos' front office staff in 2002 and there worked with 2B Luis Castillo, who went from indifferent fielder to a repeat Gold Glove winner, and with 1B Derrek Lee and 3B Mike Lowell, who also became gold glovers. Castillo sent him his first Gold Glove Award in recognition of Hill's role in making him a top fielder. His method is based on a set of pioneering drills and methods, and on an emphasis on fundamentals at a time when many teams neglect the defensive aspects of the game, something that was especially true during the offensive boom of the late 1990s.

After more than a decade as a big league coach, Hill retired in spring 2007. Then, in 2009, he was hired by the Pittsburgh Pirates to fill the vacant first base coach job. He held the job for one year and was noted for the improved fielding of 3B Andy LaRoche, who Hill worked with, but left the team afterward to spend some time away from baseball. Pittsburgh would not release him from his 2010 contract to contact other teams that year. He returned to the majors in 2011 as the first base coach of the Florida Marlins. After not being on Ozzie Guillen's staff with the re-named Miami Marlins in 2012, he returned to his familiar spot in 2013 under new manager Mike Redmond and stayed until the end of the 2018 season. In 2019, he joined the Seattle Mariners as first base coach; in 2022, he moved off first base but retained his duties as infield coach.