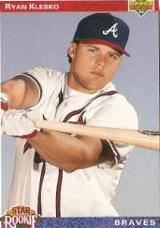 A prototypical slugging corner outfielder/first baseman, Ryan Klesko was drafted by the Atlanta Braves in the 5th round of the 1989 amateur draft. After playing sparingly at the major league level in 1992 and 1993, Klesko saw part-time action for the Braves at LF and 1B during the strike year of 1994, then solidified himself as the team's starting LF during Atlanta's 1995 World Series-winning season. He would go on to mash 20+ HR four times for the Braves with a .281/.361/.525 triple-slash line, good for a 127 OPS+, although his LF defense was quite poor according to Total Zone Rating. In 1999 he was moved from left field to first base (where he was no better with the glove) because Andres Galarraga had been diagnosed with cancer.

Following a good year with the bat for Atlanta in 1999, Klesko was traded by the Braves with Bret Boone and Jason Shiell to the San Diego Padres for Wally Joyner, Reggie Sanders and Quilvio Veras. That trio would barely produce 3 total Wins Above Replacement in their Atlanta uniforms, while Klesko continued to produce at his customary solid offensive level for San Diego. In 7 seasons as a Padre, Klesko had a 134 OPS+ and tacked on four more 20+ HR campaigns, primarily playing first base.

After sustaining a shoulder injury, Klesko was placed on the disabled list for almost all of 2006, getting only 4 at-bats and hitting .750. Nevertheless, he was added to the postseason roster, and went 2 for 3 in the NLDS. After the season, San Diego declined to exercise its option to retain Klesko, so he signed with the San Francisco Giants as a free agent. In one season as a Giant in 2007, Klesko played 116 games but posted a below-average 92 OPS+. San Francisco declined to offer Klesko salary arbitration, and after no other team expressed interest over the winter, Klesko retired prior to the 2008 season.

On a personal note, Klesko is an avid surfer. He became eligible for election to the Hall of Fame in 2013 but did not receive any votes and was dropped from the ballot.