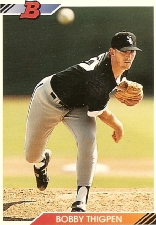 Bobby Thigpen was signed as a 4th round selection in the 1985 amateur draft by the Chicago White Sox and scout Ken Stauffer.

In 1990, Chicago White Sox closer Thigpen set a single season record with 57 saves. The record held for 18 seasons, until broken by Francisco Rodriguez in 2008. By 1993, he had lost his closer role to Roberto Hernández, and after being traded to the Philadelphia Phillies halfway through the 1993 season, he never saved another major league game. He did appear in two NLCS and two World Series games for the Phillies, however, the only post-season appearances of his career.

He is currently the White Sox career leader in saves, with 201. In 2007, he became manager of the Bristol White Sox in the Appalachian League. Thigpen was a coach for the Winston-Salem Dash in 2009-2011 and Birmingham Barons in 2012. In 2013, he was named bullpen coach of the parent White Sox, staying until the end of the 2016 season.