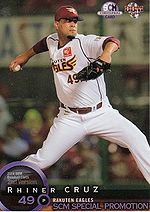 Rhiner Cruz reached the majors with the Houston Astros in 2012. His brother Jose Cruz played for the Tigers system in 2007 and the two were teammates on the Spanish national team several times.

The hard-throwing Cruz joined the Spanish national team in 2007. He had a 6.23 ERA in two outings in the 2007 European Championship; he blew a 3-2 lead against the Dutch national team after replacing Manny Olivera in the 6th inning, allowing 4 walks and 3 runs in 2 2/3 IP while fanning five. Cruz was one of Spain's worst pitchers in the 2007 Baseball World Cup with a 34.71 ERA, second-highest. He was roughed up by both South Africa (the only Spanish hurler to allow a run to South Africa) and Team USA. He allowed 9 runs in 2 1/3 IP with 9 hits and 3 walks. In the 2008 Final Olympic Qualification Tournament, he allowed 5 hits, 5 walks and 5 runs in 5 innings.

Cruz was 2-2 with a 3.99 ERA in 29 games for Rakuten in 2014; his WHIP remained high (1.74). He improved to 1-3 with a save and a 3.12 ERA for them in 52 games in 2015 but walked 29 in 49 IP. In the 2016 World Baseball Classic Qualifiers and 2016 European Championship, he was far better than his prior tournament for Spain. In the qualifiers, a disappointing run for Spain (which was defending a spot in the World Baseball Classic but went 0-2), he relieved Ricardo Hernandez in the 8th against France with two outs, one on and a 5-2 deficit. He retired Frédéric Hanvi, then Spain scored in the bottom of the 8th. In the top of the 9th, he retired Rene Leveret and Andy Paz then turned the ball over to Daniel Alvarez. He struggled in brief action in the 2016 Mexican League, with 7 runs in 7 innings. In the 2016 Euros, he was back in form. He allowed only three hits and one walk in seven innings, fanning ten and winning three games. He got the win over Belgium in relief of Hernandez, beat traditional power Italy and threw the final two innings of a combined no-hitter (with Alvarez) to get the win over Germany that put Spain in the finals for the first European Championship since 1955. He was not used in the finale, a 3-2 loss to the Netherlands. He led the Euros that year in wins and tied for the most games pitched (4, even with Loek van Mil, Andy Orfanakos and Tom de Blok).