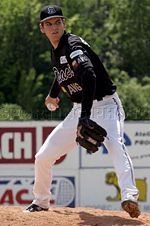 Martin Schneider has represented the Czech Republic on the international stage for about a decade; he has been one of the most prominent two-way players in Czech national team history. He has led the Czech Extraliga in homers, hits, runs twice, RBI, steals twice and ERA.

In the 2008 World University Championship, Martin batted .235/.278/.353 with 3 steals in 3 tries and was 0-1 with a 2.31 ERA. He had the second-best ERA on the Czech team. He tied for fifth in the event in steals, two behind leader Keijiro Matsumoto. During the 2008 European Championship Qualifiers, Schneider was 4 for 7 with two doubles, a triple, 3 runs, 4 RBI and a steal for the Czech team and tossed four shutout innings, fanning six to help the country win a spot in the 2010 European Championship.

Schneider was 0 for 3 in the 2017 World Baseball Classic Qualifiers in March 2016. He pitched twice, tying Alex Sogard for the Czech staff lead, allowing 4 runs (2 earned), four hits and one walk in three innings. He took the loss against Nicaragua in extra innings in the semifinals. When the Euro League Baseball began play that year, he got both the first RBI (driving in Adam Hajtmar) and the first save (saving Jason Jarvis's victory).