Tomáš Sýkora was signed by the Cincinnati Reds but was injured before he could play for them. 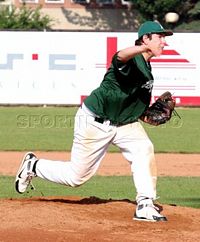 Tomáš signed a 7-year deal with the Cincinnati Reds in the summer of 2008; at just past 16 years of age, he was the youngest European player to sign with a Major League Baseball team to that point.

He left the Czech Republic right after signature with the Reds and he went to the European MLB Academy. He couldn't run but he was still throwing 88 mph right after his 16th birthday. Sykora went to the Australian academy next year at June. He have been playing at Australia for two weeks and then, when he was diving back to first base as a runner, he dislocated his throwing shoulder. He had to wait almost one hour to get to the hospital to get his shoulder back on the place where it should be, and the damage was serious. The Reds released him before he had finished his rehab. He had only gone 1-for-16 in his time in Australia.