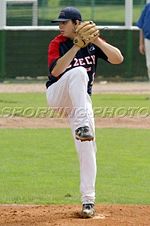 Jiří Marek is a Czech pitcher and outfielder. In 2006, he had a dazzling debut in the Extraliga as a teen. He went 7-0 with a 1.08 ERA for Draci Brno and went 20 for 38 at the plate. He tied for third in the league in wins and was third in ERA behind former minor leaguer Pavel Budský and US collegian Petr Pacas.

Marek slumped in 2007, going 0 for 11, losing both of his decision and surrendering 17 runs in 9 innings. He played in the 2007 European Junior Championship. Despite his '07 performance, he still made the Czech team for the 2007 European Championship, getting the start against the powerful Dutch national team and surrendering six runs in two innings in a loss to Shairon Martis, a future major leaguer. The big blow was a 3-run homer from Hainley Statia.