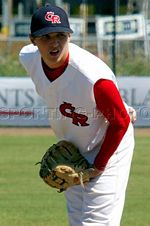 Jan Tomek has pitched in the Extraliga and Bundesliga and for the Czech national team.

Tomek was the youngest Czech player in the 2007 European Junior Championship, retiring the only batter he faced. He was in the 2008 MLB European Academy. In 2008, he was 2-0 with a 3.47 ERA for MZLU Express Brno. In the 11th/12th place game at the 2008 World Junior Championship, Tomek saved the Czech win over Russia. He had a 2-4 record, one save and a 4.78 ERA for the same club in 2009, but walked 31 in 37 2/3 innings at age 17. He again appeared in the European Junior Championship, allowing six runs (only one earned) in seven innings. His 9 strikeouts trailed only future Tampa Bay signee Štěpán Havlíček on the Czech staff.

With MZLU Express in 2010, Jan went 3-1 with a save and a 4.04 ERA. He made the Czech senior team for the 2010 Intercontinental Cup. In his first outing, he threw 1 1/3 shutout innings against the South Korean national team. The next time, though, he allowed a hit and a walk while retiring no Nicaraguans. He did finish the event with the second-least action of any Czech pitcher (only fellow youngster Tomas Duffek pitched fewer innings) but only Boris Bokaj had a 0.00 ERA in more innings than Tomek.

Tomek switched clubs again in 2013, appearing in one scoreless inning for the Arrows Ostrava. In '14, he was 2-2 with a 3.83 ERA and an Extraliga-best six saves for Ostrava, but allowed four runs in 4 1/3 playoff innings. In the 2014 European Championship, he pitched the 9th inning of an opening rout of Russia, closing out a game for Martin Schneider. He struck out the side but allowed Russia's 3rd hit, a Nikita Monakhov single. In his other game, he worked an inning against Spain and served up a dinger to Jesús Golindano. In the 2014 U-23 World Championship, he was 1-1 with a 6.75 ERA.

Tomek was on the Czech squad in the 2017 World Baseball Classic Qualifiers in March 2016 but did not get into a game. He signed with Germany's Buchbinder Legionäre Regensburg for that summer. In the 2016 European Cup, he got into an excellent duel with the Amsterdam Pirates' Robin Schel. He allowed one hit and three walks in pitching shutout ball for the first six innings but was matched zero for zero by Schel. In the 7th, a Matt Vance error on a grounder by Kenny Berkenbosch and a 4th Tomek walk put two aboard. After a sacrifice, he was relieved by David Brandl, who threw a wild pitch to score the game's lone run. Through July 17, he was 4-2 with two saves and a 1.94 ERA and among the Bundesliga leaders in ERA.