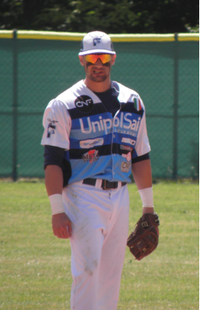 He hit .429/.500/.476 with 5 runs and 5 RBI in five games for Italy in the 2007 European Junior Championship. He made his Italian Baseball League debut in 2010, batting .204/.299/.233 as the regular second baseman for Grosseto. Despite that inauspicious debut, Vaglio was named to the Italian national team for the 2010 Intercontinental Cup and was used as their main second baseman. He hit .238/.273/.238 and fielded .968; his 5 RBI (all with two outs) tied Juan Carlos Infante and Jairo Ramos Gizzi for the team lead. He bunted into an error to score fellow youngster Alex Sambucci with the go-ahead run in a 5-2 win over South Korea, then singled off Jung-hyuk Im to score Juan Pablo Angrisano in the 8th. In the 6-2 loss to Taiwan, his single off Wei-Lun Pan scored Laidel Chapelli and Angrisano wit hthe only Italian runs. He also had a two-run single off Cuba's hard-throwing Vladimir García. He was 0 for 3 with a walk hitting 8th in the Bronze Medal game as Italy topped Taiwan, 4-3, for their first medal ever in a major global baseball tournament.

Alessandro was a backup for Italy in the 2013 World Baseball Classic as major leaguer Nick Punto was used as the main second baseman. Vaglio got into two games. He was a 9th-inning substitute at 2B in a 6-5 win over Mexico, handling the game-ending grounder from Jorge Cantú with the bases loaded. In a 6-2 loss to Team USA, he replaced Punto in the 7th inning and flew out against Ross Detwiler in his lone at-bat. He had one putout that game.

In the 2013 European Cup, he started very slowly (2 for 17, 2 R, RBI, 3 HBP, E). In the finale of the Regensburg pool, though, he was the hero, going 4 for 5 with a run and two RBI. In the bottom of the 9th, he singled off Darwin Cubillan to drive in Claudio Liverziani with the winner. He was named MVP of the Regensburg phase on the strength of that last game. In the Cup Finals, he was 1 for 6 with two walks, a run and a RBI as Bologna beat Telemarket Rimini to become the European champion. That would be even bigger when the 2013 Asia Series decided to invite the champions of the European Cup to participate. In the Asia Series, he was 2 for 6 with a double, walk and a run as Bologna's top offensive performer.