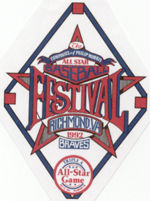 For the third straight year, and fourth time overall, the NL would be the home team. The National League affiliates would be led by Richmond Braves manager Chris Chambliss. His coaches were Bill Evers (Phoenix Firebirds) and Pat Kelly (Indianapolis Indians). The AL team would be managed by Tony Muser of the Denver Zephyrs. The AL coaches were Rick Down of the Columbus Clippers and Keith Bodie of the Calgary Cannons. The game was broadcast on the Prime Network with Clint Hurdle and Bob Boone calling the game.

An hour and 32 minute rain delay kept announced NL starter and hometown favorite David Nied from ever taking the mound as he warmed up twice only to have to sit back down. When the game finally got underway the NL sent Randy Marshall to the mound. In the top of the second inning Tim Salmon was able to score on a fielders choice to give the AL the early 1-0 lead. In the top of the 6th Salmon once again played a major role, hitting an RBI double to score Jim Tatum making it 2-0. In the bottom of the 8th the NL finally got on the board with three singles by Paul Faries, Geronimo Berroa and Carlos Garcia made it a 2-1 game. But that would be all the NL could manage. Mike Draper would pitch a 1-2-3 ninth for the AL to record the save. AL starter Dennis Moeller got the win, while Marshall got the loss.

The Stars of Stars awards were given to three AL players, the first ever awards sweep in game history. Tim Salmon of the Edmonton Trappers got the Pacific Coast League award as he was involved in both of the AL's runs, scoring the first and picking up the RBI on the second. Jim Tatum of the Denver Zephyrs got the nod from the American Association going 1-3 with a run scored. The International League award went to Columbus Clippers pitcher Sam Militello who stuck out four in two innings of work.

Future stars in the game included not only 1993 American League Rookie of the Year Award winner Salmon, but also 1993 National League Rookie of the Year Award Mike Piazza. Also appearing in the game was Bernie Williams, Bret Boone, Ed Sprague, Jeff Conine, Damion Easley, Bob Wickman and Henry Rodriguez. That November six of the AAA All-Stars found themselves drafted by new teams in the 1993 Expansion Draft. Conine, Monty Fariss, Bob Natal and Steve Decker were drafted by the Florida Marlins, while Jim Tatum and David Nied were selected by the Colorado Rockies.