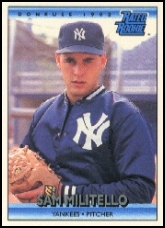 Sam Militello was selected by the New York Yankees in the 6th round of the 1990 amateur draft. He made his debut in 1990, with the Oneonta Yankees, and led the Short-Season New York-Penn League with 119 strikeouts and his 1.22 ERA was second in the league. The following year, he was the Pitcher of the Year in the Carolina League after compiling a 12-2 record with a 1.22 ERA and 113 strikeouts in 103 innings for the Prince William Cannons. He finished the year with the AA Albany-Colonie Yankees, with whom he put up a 2-2, 2.35 record in 7 starts. In 1992, he was named the Most Valuable Pitcher in the International League when he compiled another 12-2 record, with a league-leading 2.29 ERA, in 22 games with the Columbus Clippers. He made his Major League debut with the Yankees at the end of the year, going 3-3 in 9 starts. However, his promising career was cut short by injuries.

In 2009, Militello was an associate head coach for Joe Urso at the University of Tampa. He has been an assistant at UT since 2001. Miltello was a pitching coach in the Cleveland Indians chain in 1999-2000 for the Burlington (NC) Indians and Columbus RedStixx.