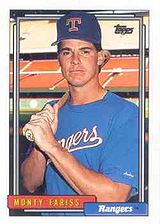 Monty Fariss played 104 games over three seasons in the major leagues, primarily as an outfielder and second baseman.

"Shortstop has felt like my natural position ever since I first started playing as a kid. Being big has never bothered me, or hurt my play. Being a big shortstop gives me some advantages. I can cover as much or more ground than anyone going from side to side, and offensively I can hit with some power." - Fariss

Born in Oklahoma, Fariss was selected by the New York Mets in the seventh round of the 1985 amateur draft out of high school but did not sign. He opted instead to attend Oklahoma State University, where he played shortstop and was a teammate of Robin Ventura. As a freshman in 1986, he hit .286 with 12 home runs, 58 RBIs, and a slugging percentage of .581, as the Cowboys reached the College World Series. As a sophomore the next year, he improved to .303 with 23 home runs and 75 RBI while slugging .662. OSU was a runner-up to Stanford University in that year's CWS. Along with Ventura, he was then a member of the silver medal-winning Team USA in the 1987 Intercontinental Cup. However, he struggled, going 1-for-14 with 1 homer, 3 walks, and 6 strikeouts; the squad's two other shortstops, Mickey Morandini and John Valentin fared much better at the plate. He bounced back in 1988, hitting .397 with 30 home runs, 114 RBIs, and an .860 slugging percentage. Oklahoma State did not reach the College World Series that year, but Fariss was selected a All-American by Baseball America.

Following his junior year, Fariss was chosen by the Texas Rangers in the first round of the 1988 amateur draft with the sixth overall pick (four selections ahead of Ventura). He was signed by scout Doug Gassaway and made his pro debut with the Butte Copper Kings, hitting 4 home runs in 17 Pioneer League games. After spending the entire 1989 campaign with the Tulsa Drillers of the Texas League, he hit .299 with 7 homers in 71 games for Tulsa the next year. He then was promoted to the AAA Oklahoma City 89ers and hit .302 with 4 home runs in 62 games at that level.

"He`s real comfortable at short, and he`s going to be a terrific offensive player. He`s going to have a chance to play." - Bobby Valentine, former Rangers manager

Fariss spent most of 1991 with Oklahoma City, hitting .271 with 13 homers before earning a September call-up to the majors. He made his big league debut on September 6th, starting as designated hitter against the Chicago White Sox and going 0-for-2 with a pair of strikeouts. He hit his first major league home run off Bill Krueger of the Seattle Mariners in the second game of a September 30th doubleheader, and he ended the year with a .258 average in 19 games for Texas. After having an impressive Spring Training in 1992, he was the Rangers Opening Day leftfielder that year. In 67 games with the team, he hit .217 with 3 homers, while posting a .299 average and clubbing 9 round trippers in 49 games for the 89ers.

After the 1992 season, Fariss was selected by the Florida Marlins in the expansion draft. He got into 18 games for the first-year club, hitting just .172, and made his final major league appearance on June 1st. He then played for the Edmonton Trappers, for whom he hit a career-best 20 home runs in 1994. He moved on in 1995, splitting his final pro season between the Iowa Cubs and the Mexican League's Monterrey Sultans.

While Fariss hit only .217 during his major league career, there are some positive things to note. First, he was good at drawing walks, and he had a .311 on-base percentage. In addition, he made no errors in his 87 games in the field. Ironically, 3 of his 4 big league home runs came against the same team, the Mariners; overall, he hit .279 against the team and .346 in the Kingdome.

Fariss was inducted into Oklahoma State's Baseball Hall of Fame in 1994, and in 1996, he was on the screening committee that chose the school's next baseball coach. As of 2001, he was running Monty Fariss Enterprises, which handled youth sports for several hundred teams, as well as operating a batting cage in Edmond, Oklahoma. In 2011. he was coaching the Oklahoma City Broncos, a team of high school-aged home-schooled players.