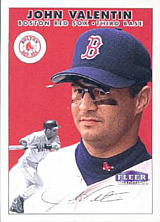 John Valentin was signed by Matt Sczesny for the Boston Red Sox as a 5th round pick in the 1988 amateur draft. He played eleven seasons in the big leagues, mostly for the Red Sox. He was ninth in the MVP voting in 1995. A shortstop in his first five years, he played second and third base in the years after that until his last year with the New York Mets, when he again played shortstop more than the other positions.

Valentin hit .304/~.448/.565 for Team USA in the 1987 Intercontinental Cup, when they won Silver. He played shortstop and second base, but was unable to keep pace with the performances put up by tourney All-Stars (Mickey Morandini and Antonio Pacheco respectively) at those positions. He was a teammate of Mo Vaughn at Seton Hall University and on the Boston Red Sox.

Valentin came up the same year (1992) as Jose Valentin, a player with a similar name who also played shortstop in the American League. Some years one would be more prominent, and other years the other would get most of the attention. Both had above-average range at shortstop, and both had some power.

He became the manager of the 2008 Inland Empire 66ers after Dave Collins resigned in January due to family issues. In 2013, he was named assistant hitting coach of the Los Angeles Dodgers, staying until the end of the 2015 season.