The Indians started preparing for the upcoming season by making several improvements to Grainger Stadium. Sixty new box seats were installed at field level. Seven new boxes with six seats each were placed on the third base side, and three new boxes were installed on the first base side. The concession areas were revamped as well with several being moved to more convenient locations to accommodate lines and a new concession stand being installed in the picnic area. New connections were installed in the beer coolers to allow for multiple kegs to be connected to single outlets to alleviate delays. New restrooms were created on the third base side of the concourse in an area that was once used as the home team clubhouse. The stadium's lighting system was upgraded to conform with new minor league standards. The KTribe clubhouse was given a new coat of paint along with new carpeting and an improved air conditioning system. A new irrigation system was installed for better drainage from the field and a batting cage was placed behind the third base grandstand.

The team also purchased Grainger Stadium's first full size infield tarp. Kinston lies in an area subject to the annual hurricane seasons which roughly correspond with the baseball season. The usual rains coupled with occasional tropical storms from the Atlantic caused numerous postponements and subsequent doubleheaders in past years. Prior to the tarp, a single heavy rain could sometimes wash out a couple days worth of games while the infield dried out.

Jesse Barfield was inducted into the Kinston Professional Baseball Hall of Fame during the team's Hot Stove Banquet. Barfield was a member of the 1979 Kinston Eagles.

The team played an exhibition game against North Carolina Wesleyan College on April 11. 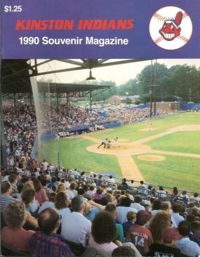 The Indians opened the first half of the 1990 season with a 16-5 record helped out by Jerry Dipoto who began the season 4-0 with an earned run average of 0.79. The Winston-Salem Spirits caught Kinston on June 6, but the KTribe regained first the next day with a 3-1 victory over the Spirits. It was a tight race all the way to the end with Kinston finishing the half just one game ahead.

The 1990 Carolina League All-Star Game took place at the home ballpark of the Prince William Cannons on July 18. In a ten inning affair, the Southern Division defeated the North 5-4. The South was managed by Kinston's Brian Graham who ran out of pitchers late in the game. He was forced to use infielder Lem Pilkinton of Peninsula who became the unlikely winning pitcher.

Peninsula got off to the good start in the second half and led for two weeks. Winston-Salem and Durham shared the division lead through July. Kinston was coming on strong though with a nine game win streak late in the month. They finally tasted first on August 4. After a brief resurgence by the Spirits, Kinston retook first and held on to sweep both halves and earn a bye for the first round of the playoffs.

By winning both halves of the season in the Southern Division, the KTribe earned a bye for the first round of the playoffs. The Frederick Keys also earned a bye by winning both halves in the Northern Division. Kinston had a far superior record in the regular season (88-47 vs. 74-62) and in head-to-head action the KTribe was 12-5 over the Keys. For those reasons, Kinston was heavily favored.

In Game 1 of the championship round in Kinston, Oscar Munoz had a two-hit shutout through eight innings and had a lead of 4-0. In the ninth, Frederick came from behind with six runs including a two-run homer by Tyrone Kingwood that chased Munoz from the mound. A disheartened KTribe was unable to mount a bottom of the ninth comeback.

The Indians won Game 2 at home 8-4 behind Curt Leskanic. The heroes of the game were Rick Falkner who drove in three runs on two hits and Jesse Levis who also drove in three.

With the series tied 1-1, the teams resumed play in Frederick for Game 3. After ten and a half innings, the score was still tied at zero. In the bottom of the eleventh, Ricky Gutiérrez led off the inning with a walk. A balk sent him to second. Game 1 hero Tyrone Kingwood hit a high fly ball to right which Fabio Gomez misplayed for an error. Gutiérrez was able to come around and score before the ball found its way back to the infield.

Manager Brian Graham decided to let the Indians skip batting practice before Game 4, and the move seemed to work as the KTribe bounced back with an 8-5 victory. Tracy Sanders and Tim Costo both homered in the five-run fifth inning. A shoestring catch by leftfielder Sanders while the bases were loaded with two outs in the bottom of the ninth inning preserved the Indians win.

Despite a five run lead in the deciding Game 5, the Indians pitchers were lit up for seven unanswered runs including a three run home run by Tim Holland in the sixth inning. The Keys took home the Mills Cup. They would not win another championship until 2005.

Two members of the 1990 squad were honored for their college play. Tim Costo and Oscar Munoz were finalists for the Golden Spikes Award in November. The award goes to the top amateur player in the country, and the winner was Alex Fernández.

The KTribe awarded its Tex Drake Award, its prize for the player who overcame adversity during the season, to Chris Pinder who overcame a shoulder injury during the season. The Pat Crawford MVP Award was won by Greg Ferlenda. The Lewis B. McAvery Award for "outstanding contribution to professional baseball in Kinston" went to Cam McRae who was a part owner and major sponsor of the team. The Steve Gaydek Award for sportsmanship was given to Rouglas Odor.

Kinston's attendance for the year was 106,219 which was an increase of some 18,000 from 1989. It was the first time a Kinston franchise topped one hundred thousand since the 1964 season, and the accomplishment was celebrated by the team. Kinston resident Lea Jeffress was the 100,000th fan through the gates and won a prize package that included a trip to Charlotte to see a Charlotte Hornets basketball game. The front office raised individual ticket prices twenty-five cents to $3.75 for reserve seats and $2.75 for general admission. Season ticket packages were raised to $800 for reserve box seats, $140 for reserve grandstand, and $125 for genral admission.

Every game was broadcast on country station WRNS 960AM. The team's exploits were reported each day in the Kinston Free Press.

Of the forty-five men who played for the 1990 Kinston Indians, twelve have since played in the majors. Garland Kiser, Tom Kramer, and Jim Thome were September call-ups in 1991 for Cleveland. Jesse Levis made the show early in 1992 while Tim Costo found his way to the majors with the Reds in September. Jerry Dipoto got to Cleveland the following year while Curt Leskanic joined the Colorado Rockies, Chris Howard joined the White Sox, and Eduardo Zambrano was called on by the Chicago Cubs. Oscar Munoz made the Minnesota Twins roster and Robert Person made the Mets' in 1995. Ken Ramos had the longest wait. He made it to the majors with the Houston Astros in 1997.

One other player, Dan Williams, made it to Cleveland's major league staff as a bullpen coach in 1995.

By far, the most successful of the twelve players in the major leagues was Thome. He has lasted 21 seasons through 2011 and is still active. Along the way, he has hit 595 home runs, collected 1,641 RBI, made five all-star teams, and won Silver Slugger and Roberto Clemente awards. He is currently 17th on the all-time OPS list. As of 2011, Thome and Manny Ramirez have the most impressive resumes for the Hall of Fame of any other former Kinston Indians. Rick Ferrell, who played for the Kinston Eagles in 1926, is the only former Kinston player to be enshrined. Also notable were Leskanic (11 years, 50-34) and Person (9 seasons, 51-42). Dipoto is currently the General Manager of the Los Angeles Angels of Anaheim.

From the coaching staff, manager Brian Graham made it to Cleveland's coaching staff and also became the General Manager for the Pittsburgh Pirates.