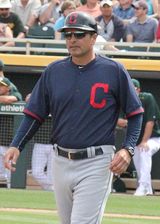 Mike Sarbaugh played six seasons in the minors before becoming a minor league coach. He played for the Helena Brewers in 1989, then in the Cleveland Indians' chain from 1990 to 1994.

In 2004, he was the manager of the Mahoning Valley Scrappers and the next season he led the Lake County Captains. In 2006, he became skipper of the Kinston Indians of the Carolina League. Sarbaugh then managed the Akron Aeros of the AA Eastern League in 2008.

Sarbaugh has won a Carolina League championship as a player (1991), a coach (1995), and as a manager (2006) - all with Kinston. In 2013, he was appointed first base coach of the Cleveland Indians. He then served as third base coach starting in 2014 until midway through the 2021 season, when he was named bench coach in place of DeMarlo Hale, who had been named the team's interim manager due to Terry Francona's health issues. He returned to coaching third base in 2022.

This page is in need of some additional content. Please help the Bullpen by expanding it, or learn how to contribute.
Retrieved from "https://www.baseball-reference.com/bpv/index.php?title=Mike_Sarbaugh&oldid=1222558"
Categories: