The Indians started preparing for the upcoming season by making some improvements to Grainger Stadium. The main upgrade was a new parking lot behind the wall in center and right field. Work on the concession areas that started the year before was also completed. Cosmetic improvements were also made as new flower boxes and shrubbery were added throughout the facility.

John McLaren was inducted into the Kinston Professional Baseball Hall of Fame during the team's Hot Stove Banquet. McLaren was the manager of the 1981 Kinston Eagles and the 1982 Kinston Blue Jays.

The team played an exhibition game against East Carolina University on April 10. 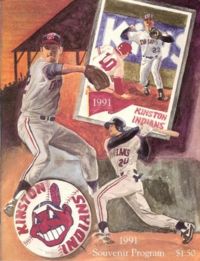 For the second season in a row, the Kinston Indians won the Southern Division during both halves of the Carolina League campaign. They took the first half three games ahead of the Winston-Salem Spirits (43-27) who featured Steve Trachsel on their pitching staff. The K-Tribe won the second half five games ahead of the Durham Bulls (41-29) whose firepower included Javy Lopez and Tony Tarasco. One of the incidents that has been credited with unifying the squad was a bench clearing brawl with the Salem Buccaneers early in the first half. It was sparked when Chad Allen hit Alberto de los Santos in the back.

Relief pitcher Mike Soper established a saves mark of 41 that has stood ever since as the league record. At the time, the mark also tied the all-time minor league saves record. He led the loop with 62 games pitched and posted a 2.47 earned run average. Curt Leskanic tied for the league lead in wins (15) with Winston-Salem's Ryan Hawblitzel. Curt also led the rest of the CL in strikeouts (163) and had an impressive 2.79 ERA.

On May 26, Oscar Munoz threw a 1-0 no-hitter against the Prince William Cannons at Grainger Stadium. He faced the minimum 27 batters and had 12 strikeouts. Earlier in the season, Munoz had thrown eight no-hit innings against the Salem Buccaneers but had to come out of the game due to a high pitch count. Paul Byrd, Scott Morgan, and Soper threw a combined 1-0 no-hitter against Prince William on August 23.

At the plate, Tracy Sanders led the league with 18 home runs and 83 walks. Mike Easley tied a Carolina League record by scoring six runs in a game on May 4.

The KTribe also found its way into the record book for its fielding. On May 9, shortstop Tim Rigsby had five errors in a single game which tied the league mark. Second baseman Miguel Flores had 11 assists in a single contest on July 5.

Game 1 of the championship series was played in Lynchburg. The K-Tribe took the opener 7-2 behind the pitching of starter Curt Leskanic who threw eight innings for the win. Mike Sarbaugh had a 4 for 4 night and drove in two while Paulino Tena also contributed with two hits.

Game 2 was even more of a blowout as the Indians won 9-2 over the L-Sox. Starter Chad Allen gave up one run in eight innings. Kyle Washington, Tracy Sanders and Brian Giles all homered off of Red Sox pitching.

Kinston's Grainger Stadium was the scene of Game 3. Lynchburg's Ed Riley and K-Tribe hurler Shawn Bryant gave the Kinston fans a pitcher's duel through six innings. Bruce Chick led off the seventh with a home run. Riley went into the ninth winning 1-0 and having given up just one hit. Miguel Flores got the rally started with a one-out single. Tena kept it alive with a two-out single. Tracy Sanders hit what should have been a fielder's choice that was bungled by Lynchburg as Tena was able to slide into second under the tag and Flores came around to score the tying run. Lynchburg made the decision to set up a force out at every base by intentionally walking Sarbaugh. Lynchburg reliever Tony Mosley hit Brian Giles with the next pitch sending home the winning run as Kinston swept Lynchburg 3-0 in the best of five series. Tena was picked as the series Most Valuable Player going 6 for 13 (.462) and making several outstanding plays in the field.

Four Indians were named to the league's Post-Season All-Star team: Miguel Flores as second baseman, Brian Giles and Tracy Sanders as outfielders, and Mike Soper as relief pitcher. Brian Graham was named as the league's Manager of the Year.

Following the season, Assistant General Manager Kevin Scotellaro left Kinston to be the General Manager of the Appleton Foxes and Beth Smyth, director of regional marketing, left to work in the front office of the Prince William Cannons.

Kinston's attendance for the year was 100,857 which was a decrease of some 6,000 from 1990. It was the first decrease in attendance since the franchise was an unaffiliated team in 1986. The front office kept individual ticket prices the same at $3.75 for reserve seats and $2.75 for general admission. Season ticket packages were raised to $825 for reserve box seats (up 25 dollars), $145 for reserve grandstand, and $130 for genral admission (both up 5). Access to tickets was improved by adding regional ticket outlets at businesses in Goldsboro, Greenville, Jacksonville, and New Bern

Following the winning of the Carolina League championship, a special commemmorative Coca-Cola can was issued to honor the team.

Every game was broadcast on country station WRNS 960AM. The team's exploits were reported each day in the Kinston Free Press.

Of the forty men who played for the 1991 Kinston Indians, eight have since played in the majors. Garland Kiser became the fourth KTribe player to make it to the big leagues in the same year he played in the Carolina League when he was called up by Cleveland in September. In April 1993, Willie Cañate was brought up by the Toronto Blue Jays, and, in June, the Rockies gave Curt Leskanic his shot in the show. The rest of the players made it to the big leagues in 1995. They were Paul Byrd (Mets), Oscar Munoz (Twins), Roberto Rivera (Cubs), Brian Giles (Indians), and Robert Person who was the last to report on September 18, 1995 for the Mets. As can be seen above, only two of the eight debuted with Cleveland.

One other player, Cameron Drew, was in the majors prior to coming to Kinston. He had spent several weeks with the Houston Astros during the 1988 season.

Player/Coach Dan Williams made it to Cleveland's major league staff as a bullpen coach in 1995.

From the coaching staff, manager Brian Graham made it to Cleveland's coaching staff and also became the General Manager for the Pittsburgh Pirates.