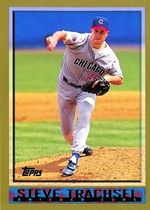 Steve Trachsel pitched 16 years in the majors, mostly with the Chicago Cubs and New York Mets, winning 15 games once with the Cubs and 15 or more twice with the Mets.

He was at California State University, Long Beach at the same time as Jason Giambi.

He had a well-deserved reputation as one of the slowest-working pitchers in baseball, and because of this has earned the name "the Human Rain Delay" (which had previously been attributed to Mike Hargrove for his propensity to take endless time making adjustment between pitches while batting; the two never got to face one another, though).

He is often credited for the record of making 61 pitches in one inning in 1997, when he was pitching for the Cubs. However, the sites that mention this record never cite the game or inning in which this feat is supposed to have happened. Research conducted by SABR member Ed Hartig failed to uncover a game when the supposed feat could have occurred, meaning that this is likely an urban legend. As a consequence, no one knows for sure what the record is for most pitches thrown in an inning.