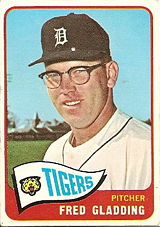 Bespectacled reliever Fred "The Bear" Gladding had a 13 year big league career and recorded more than 100 saves. He later was a longtime coach.

Originally signed by the Detroit Tigers, Gladding made his pro debut in 1956 with the Valdosta Tigers. The following year, he went 16-8 for Valdosta and led the Georgia-Florida League with a 2.12 ERA. Pitching for the Augusta Tigers on May 25, 1958, he threw a 7-inning no-hitter against the Macon Dodgers. He reached the majors with the Tigers in 1961. Following the 1967 season, he was dealt to the Houston Astros. With Houston, he led the National League with 29 saves in 1969.

A terrible hitter (even for a pitcher), Gladding had only one hit in 63 at-bats, for a career batting average of .016. This is currently the lowest non-zero career batting average in major league history. His only hit was a single in the top of the 9th inning for the Astros against the New York Mets on July 30, 1969, off Ron Taylor. In this inning, Houston scored 11 runs, as Denis Menke and Jimmy Wynn each hit grand slams.

After his playing career ended, Gladding was a minor league instructor for the Tigers in 1974 and 1975 and the Tigers' major-league pitching coach from 1976 to 1978. He was later a minor league coach with the Cleveland Indians, serving with the Tacoma Tugs in 1979. He also coached in the Astros system with the Asheville Tourists in 1986, the Columbus Astros in 1987 and 1988, and the Columbus Mudcats in 1989. In 1990 he rejoined the Indians organization with the Kinston Indians and stayed there for the 1991 season as well. He then became the pitching coach for the Columbus Red Stixx from 1992 to 1994.