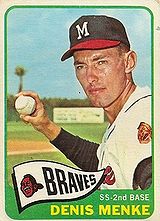 Denis Menke, who played 13 seasons in the big leagues, played a variety of infield positions. He had 841 games at shortstop, 420 at third base, 233 at second base, and 162 at first base. And he didn't just play back-up - at different times, he was his team's regular at each position. As a hitter, he had 101 major league home runs, playing largely during the second dead-ball era.

Menke was born in Bancroft, IA, and attended St. John's High School there. He signed with the Milwaukee Braves as a free agent in 1958 and played in their minor league system from 1958 to 1962. Most notably, he hit .336 with 28 home runs for the Yakima Bears in 1960.

Denis broke into the majors in April of 1962, and became a regular in 1963. With the Braves in 1964 he had perhaps his best major league performance, putting up an OBP of .368 and also slugging .479 while serving as the regular shortstop on a Braves team that won 88 games. Denis' 20 home runs were almost as many as the 24 hit by the 30-year-old Hank Aaron or the 23 hit by the 32-year-old Eddie Mathews, and Denis amassed the 20 home runs in fewer plate appearances than either Aaron or Mathews. It remained the record for a Braves' shortstop until 2021, when his total was finally surpassed by Dansby Swanson.

After the 1971 season he was part of the famous trade that brought him, Joe Morgan and others to the Cincinnati Reds for Lee May, Tommy Helms and others. Manager Sparky Anderson used him as the third baseman as the Reds won their division in each of 1972 and 1973. Denis appeared in the 1972 World Series.

In 1993 he was a hitting instructor for the division-winning Philadelphia Phillies. He was the hitting coach for the Reds from 1997-2000.