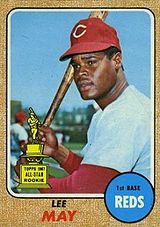 Lee Andrew May
(The Big Bopper)

Lee May hit 354 home runs and was a three-time All-Star who played on two World Series teams in the 1970s. Had he played at any other time than in the dead-ball era of the 1960s and 1970s, it's possible he might have made the Hall of Fame.

May, born in Birmingham, AL, in 1943, was signed by the Cincinnati Reds as an amateur free agent in 1961. He played six years in the minors. With the Tampa Tarpons, in the Single A Florida State League, he hit no homers his first season, but thereafter his home run totals climbed each year, with 10 for Tampa in 1962, 18 for the Rocky Mount Leafs in 1963, 25 for the Macon Peaches in 1964, and 34 for the San Diego Padres in Triple A in 1965.

He had a cup of coffee with the Cincinnati Reds in 1965. Back in Triple A with the Buffalo Bisons in 1966, he hit only 16 home runs, but he came up to the majors to stay. In 25 games with Cincinnati, he hit .333 with 5 doubles and a couple home runs. In 1967 May saw limited action at first base and in the outfield during the early weeks of the season. Then Deron Johnson, who had been starting at third base, went on the disabled list. The Reds moved Tony Perez from first base to third and handed May the starting job at first. Perez quickly entrenched himself at third, playing at an All-Star level. Meanwhile, May's play at first proved that he was capable of being a major league starter. After his return from the DL, Johnson wound up battling May for playing time at first for the rest of the year. The Reds cleared the way for May to become the full-time starter at first by trading Johnson to the Atlanta Braves after the season. May's home run power went up each year, until in 1969 he hit 38 home runs with 110 RBI. His batting average of .278 was only one point above the team average of .277, but his slugging percentage of .529 was over a hundred points better than the team percentage of .422. Perez hit 37 home runs that year, and Pete Rose led the league with a .348 batting average.

After hitting 34 home runs in 1970, May hit .389 in the 1970 World Series, slugging .833. May batted fifth in the lineup, generally behind Pete Rose, Bobby Tolan, Tony Perez in the third spot, and Johnny Bench at cleanup. But his most enduring moment in the series was a dubious one, in Game 1, when he slammed a blazing line drive just fair of third base on which Baltimore Orioles third baseman Brooks Robinson made a miraculous back-handed play and threw him out with an impossible over-the-shoulder throw, as the Reds went on to lose in 5 games. May almost duplicated his 1969 season in 1971. That year, he again hit .278, and his .532 slugging percentage was very close to the .529 from 1969. Instead of 38 home runs, he hit 39. Even his on-base percentage was only one point off between 1971 and 1969.

May was 28, and seemed to be headed toward the Hall of Fame. Although he hadn't led the league in anything, he was an All-Star in 1969 and 1971, and he had been among the league leaders in various categories from 1968 to 1971. Overall his 145 home runs between 1967 and 1971 was tied with Dick Allen for 9th most in the majors during that five-year span.

Then he was traded to the Houston Astros in the Joe Morgan trade. Houston played in a pitcher's park, the Astrodome, which was not at all favorable. Whereas he had hit at least 34 home runs in each of his previous three seasons in Cincinnati, when he came to Houston for three seasons, his highest season total was 29. Still, Lee was the big power hitter on the Astros during the first two seasons, 1972 and 1973, as the Astros declined from a contending team to a middling one. In the third season, 1974, he was second on the team in home runs behind Cesar Cedeno. He was named to the All-Star team in 1972, his first season on the Astros. 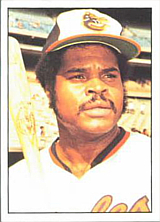 After three seasons in Houston, May was traded to the Baltimore Orioles in the Enos Cabell deal prior to the 1975 season. He was to stay six years with the Orioles, as he aged from 32 to 37 years old. He always hit around .250 during those years, and his home runs ranged between 19 and 27 per year in the first five years. His teammates included Brooks Robinson, Ken Singleton and Eddie Murray, who would eventually push him off first base. He appeared in the 1979 World Series, getting one at-bat, as by then he was the team's designated hitter, with Murray playing first, and that Series did not use the DH. His job on the Orioles was to drive in runs, and that he did well, even leading the American League with 109 RBI in 1976.

May's 354 home runs currently put him on the all-time list just behind Yogi Berra, who hit 358, Johnny Mize at 359, and Joe DiMaggio at 361. Ralph Kiner is at 369, and May's old teammate Tony Perez is at 379. However, his other statistics are not in the Hall of Fame range. His 1,244 RBI are not in the top 100 of all time, and place him below Gil Hodges, who is also not in the Hall. It is not a surprise that the most similar players to Lee May, using the similarity scores method, are sluggers such as Tino Martinez, Boog Powell, George Foster, Joe Adcock, Willie Horton, George Scott and the aforementioned Hodges.

May was inducted into the Baltimore Orioles Hall of Fame in 1998 and the Cincinnati Reds Hall of Fame in July 2006. He is the brother of Carlos May and the father of Lee May Jr.. Lee Jr.'s son, Jacob May, was a third-round selection by the Chicago White Sox in the 2013 amateur draft, playing in the majors during the 2017 season. Several months after Jacob's big league debut, he passed away from pneumonia at the age of 74.

His first baseball card appearance was in the 1966 Topps set.