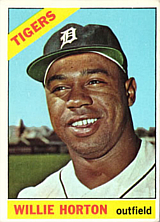 Raised in Detroit, MI, the muscle-bound and much-heralded young phenom Willie Horton grew up playing on the sandlots before signing and playing with the Detroit Tigers for 15 years, from 1963 to 1977. A pure slugger by nature and prone to striking out a lot (over 100 times in 7 separate seasons), he became an instant Tiger favorite and remains so today. Because of his long Tiger career and local origins, Horton arguably symbolizes Tiger baseball more than any other player - past or present. A good but not great ballplayer, his statue nonetheless proudly graces Comerica Park among the Tiger greats. He hit 325 major league home runs and also exactly 100 home runs in the minor leagues. Horton, in 2000, became the only non-Hall of Famer to have his number (#23) retired by the Tigers. Horton serves as a consultant for the Tigers and also helps coordinate annual Fantasy Camp activities.

One thing that Horton is famous for is during the 1967 race riots in Detroit, he, a black Detroit resident who grew up not far from where the riots were taking place, drove to the area after a game and stood on a car in the middle of the crowd while he was still wearing his uniform. However, despite his impassioned pleas, he could not calm the angry mob.

At his best, Horton could play at a Hall of Fame level. His 165 Adjusted OPS+ in 1968 was third-best in the American League (only five points behind leader Carl Yastrzemski) and he also posted a 152 OPS+ in 1974. If he had been able to put up stronger numbers in his later years after 1975, he would have been a viable Hall of Fame candidate.

Horton was a New York Yankees coach in 1985 and a member of the Chicago White Sox staff in 1986. His first Baseball Card appearance was in the 1964 Topps set.