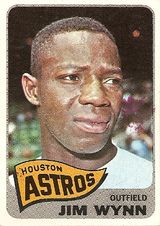 Jim Wynn had an excellent 15-year major league career. He was one of the many youngsters who played on the Houston Colt 45's in the early 1960s. His lifetime .250 batting average is better than it appears because he played most of his career in the second dead-ball era and he played in a pitcher-friendly ballpark. His 128 OPS+ puts him in a tie with Goose Goslin, Mickey Cochrane, John Olerud, Keith Hernandez and others.

Additionally, he was an excellent power hitter given those circumstances and he added enough walks to reach a .366 on-base percentage. Wynn hit 291 career home runs; his 37 round trippers in 1967 were second in the National League behind Hank Aaron at 39. His 148 walks in 1969 were a National League record for many years.

He finally was traded to a competitive team for the 1974 season, and his performance (he was 5th in the MVP voting) helped the Los Angeles Dodgers win the pennant. Although Steve Garvey won the MVP award, Wynn had a much higher on-base percentage, slugging percentage and OPS+ that year.

Wynn was a multi-talented player. His range in the outfield was good (he mostly played center field), and he also appeared 21 times at shortstop during his rookie year. As a base stealer, he had 225 lifetime stolen bases, finishing third in the league in 1965 with 43. His 1,224 walks put him #56 on the all-time list, and his 1,427 strikeouts put him #87 on the all-time list.