Following the 1986 season, the Cleveland Indians signed a player development contract with the Kinston franchise in the Carolina League with the intention of moving the team to Waldorf, Maryland. An ownership group under the leadership of Stuart Revo purchased the franchise from Gary Fitzpatrick and his Pyramid Baseball Enterprises in late September. A team name had been chosen (Chesapeake Voyagers), a local developer had donated land, the league had approved the move, and construction had begun on a new stadium. The move seemed like a done deal. The 1986 Charles County commissioners' election in November changed everything. Three new commissioners voted into office soon reversed course on the plan. They voted to halt construction of the stadium and payed almost $500,000 to back out of signed contracts and undo completed work. Charles County would have to wait over twenty years for the Southern Maryland Blue Crabs to bring them professional baseball. With nowhere to go, the Indians kept the team in Kinston and have remained there ever since. 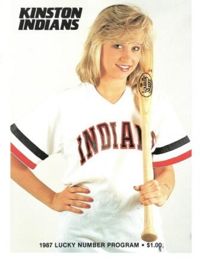 The Indians had a losing record (33-37) in the first half of the season and came in third behind Winston-Salem (41-29) and Peninsula (34-36). Kinston jumped out of the gate in the second half with a 7-2 record and pulled away from the pack quickly. At the end of play, they had a ten game lead over second place Durham.

Standouts at the plate included first baseman Milt Harper (.312, 20 HRs, 97 RBI), outfielder Kerry Richardson (87 RBI), and outfielder Scott Jordan, but the year belonged to Casey Webster. The Kinston third baseman/designated hitter hit .318 with 20 home runs and 111 runs batted in. The RBI total not only led the league but also tied a thirty year old Kinston franchise record set by Carl Long in 1956 for the Pirates affiliated Kinston Eagles. Through the 2008 season, it still stands as the Kinston RBI mark. Webster also established a Carolina League record for most assists by a third baseman in a nine inning game (10) on August 8 against Durham. The black mark on Webster's season was on August 17 when he had his bat impounded in a game against Peninsula. His barrel had been drilled out an eighth of an inch to help increase bat speed.

The hitting staff as a whole had 59 sacrifice flies for the season which established a new Carolina League record.

The pitching staff was anchored by right-hander Andy Ghelfi who went 12-6 on the year and Charlie Scott who led the league in earned run average with 2.69.

Infielder Tommy Hinzo moved up rapidly after starting the year in Kinston. In the middle of July he got called up to Cleveland making him one of the very few non-rehab Carolina League players to make it to the majors within a season. In another unusual move, Cleveland called Kinston pitching coach Steve Comer up to the majors following the firing of Jack Aker in early July. Since Comer had to depart for Cleveland before even Aker knew what was going on, things had to be kept secret, and the coach did not have an opportunity to even say goodbye to his pitching staff.

The All-Star Game was held on July 15 at Peninsula's home stadium in Hampton, Virginia. The hero of the game was Kinston's Casey Webster who hit a solo home run in the bottom of the seventh that broke up a 1-1 tie. The South hung on to defeat the North Division 4-1.

Manager Mike Hargrove's wife, Sharon, began writing a book while in Kinston during the summer of 1987. It was released under the title Safe at Home: A Baseball Wife's Story. It gave the spouse's perspective on life in baseball and included many anecdotes and behind the scenes stories that happened during the 1987 season.

Kinston's second half finish earned them a playoff with the South Division's first half winners, the Winston-Salem Spirits. In the three game series, the KTribe swept the Spirits in two games. They won Game 1 by a score of 11-6 and Game two 10-7 in 12 innings. Winston-Salem committed 11 errors during the two games including three errors in the top of the 12th in Game 2. Nine of Kinston's 13 runs were unearned.

The first round victory gave the Tribe a shot at the Carolina League crown against the North Division champs, the Salem Buccaneers. It was the first time a Kinston team had a spot in the championship round since 1971. Salem shut them down three games to one in the five game series. None of the Salem victories were very close as they won 6-2, 7-1, and 5-2. Kinston starter Mike Walker put in an excellent six inning performance (10 strikeouts and just 4 hits) in a losing cause. The KTribe had to take solace in the fact that their one victory came at home.

Following the season, Casey Webster was rewarded for his amazing season by being named to the league's Post-Season All-Star team at the designated hitter position. He was also selected as the league's Player of the Year. Manager Mike Hargrove was named Manager of the Year for the league.

The KTribe awarded its Tex Drake Award, its prize for the player who overcame adversity during the season, to Andy Ghelfi who came back from shoulder surgery. The Pat Crawford MVP Award was shared by Casey Webster and Milt Harper. The Lewis B. McAvery Award for "outstanding contribution to professional baseball in Kinston" went to Ray Beard, a member of the Mayor's Committee for Professional Baseball, and vice president Gary Fitzpatrick. Fitzpatrick announced his resignation to take a job with a radio station in West Palm Beach, FL. The Steve Gaydek Award for sportsmanship was given to Kerry Richardson who "always had time for fans of all ages."

Kinston's attendance for the year was 68,199 which was an increase of some twenty thousand from 1986 when they were the unaffiliated Kinston Eagles. A winning team certainly contributed to the nearly forty percent increase in fans. An affiliation with a Major League team probably played a bigger role though. Kinston utilized Cleveland's Chief Wahoo as its logo rather than opting for an original brand to emphasize its connection to the big club. They also utilized another well recognized Cleveland icon when Bob Feller made a personal appearance at one of the games in July. General Manager and part owner North Johnson fostered closer bonds with the mayor's office and helped create the Mayor's Committee for Professional Baseball. This would prove crucial in the coming years as ties with local political and business leaders would foster growing attendance numbers throughout the early Indians years.

Giveaways in 1987 included caps, helmets, baseballs, t-shirts, jerseys, gym bags, baseball cards, wrist bands, bats and gloves. One advantage of having Chief Wahoo as your logo above brand recognition was the convenience of having a wealth of ready made branded items for the shop and giveaways. Also bringing in fans were special appearances by the aforementioned Bob Feller, a group called the Hollywood Starlets, and the San Diego Chicken. Special theme nights were also held for various local businesses such as "Vernon Park Mall Night" and "DuPont Employees Night."

The team's exploits were reported each day in the Kinston Free Press.

Of the thirty-four men who played for the 1987 Kinston Indians, eight have since played in the majors. As mentioned above, Tommy Hinzo was called up to Cleveland before the end of the season. Rod Nichols made the show the following summer while Scott Jordan and Mike Walker were 1988 September call-ups. During the summer of 1989, Joey Belle and Kevin Wickander made it to Cleveland. Ever Magallanes got his shot with Cleveland in May of 1991. Jim Bruske had the longest wait and was the only one of the eight who did not debut with the Indians making the show with the Los Angeles Dodgers in 1995. Another player, Trey Hillman, made it to the majors as the manager of Kansas City Royals in 2008.

By far, the most successful of the eight players in the major leagues was Belle who went by Albert during most of his time in the bigs. Belle lasted twelve seasons before injuries forced him to bow out. Along the way, he hit 381 home runs with 1239 runs batted in, made five All-Star teams and, for a time, was the highest paid player in professional baseball. Bruske was the only one of the group to capture a World Series championship thanks to a brief stint with the New York Yankees at the end of 1998.

Every member of the coaching staff made it to the major leagues. Pitching coach Steve Comer was called up to Cleveland in the middle of the 1987 season. Mike Hargrove took the reins of the big tribe in 1991. Trainer Lee Kuntz joined the staff of the Royals prior to the 1999 season. Hitting coach Brian Graham found his way to the majors through the front office of the Pittsburgh Pirates. He became their General Manager in September 2007.