Sam Narron was inducted into the Kinston Professional Baseball Hall of Fame during the team's Hot Stove Banquet. Narron was from nearby Middlesex, North Carolina.

On April 7, the KTribe played an exhibition game against the East Carolina University team. 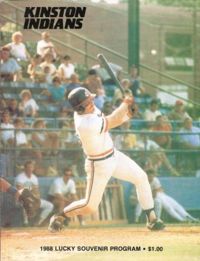 Kinston swept both halves of the Carolina League season with the Durham Bulls close on their heels. Durham led in the early going of the first half. By May 7, Kinston was 3.5 games behind and in third place behind Winston-Salem. Kinston finally caught Durham in the middle of June. The first half ended with a four game series in Kinston with the KTribe leading by one. The Bulls took the first game 4-3 behind Kent Mercker. Kinston had a come from behind victory in the second game to win 8-4. Durham shutout Kinston 7-0 in the third game to send the two teams into the final day of the half all tied up. In the deciding game, the Bulls had a lead of 5-1 in the middle of the fourth inning, but Kinston never gave up and tied it with a Beau Allred home run in the sixth. Kinston's winning run came on a double, a balk and an Ever Magallanes sacrifice fly.

The second half was not as close with Kinston winning its last nine games to finish five games ahead of Durham.

The KTribe captured its second Southern Division title in a row due largely to its pitching. The pitching staff had a combined 3.10 earned run average, a full half run better than Winston-Salem. The Indians had three eleven game winners: John Githens, Todd Gonzales, and Mark Gilles. Lefty Kevin Bearse won ten games as a reliever along with leading the league in saves (22). His 1.31 ERA would have easily won the ERA title, but he came up nine innings short of qualifying. Steve Olin (5-2, 8 saves) made key contributions in the second half. Rod Nichols repeated Tommy Hinzo's amazing feat from last year and made the climb from Kinston to the majors within the year. Nichols made his debut with the big Tribe on July 30.

At the plate, Mike Twardoski impressed with a .322 batting average, six home runs, and 87 runs batted in. Joey Belle was leading the league in RBI when he announced that the game was no longer fun for him. He went AWOL shortly thereafter drawing a suspension from the Indians. Besides the disappearance of Belle, the KTribe also had to do without Rob Swain for much of the season after he suffered a broken wrist.

Kinston hosted the All-Star Game which the Northern Division won 2-1. The game was dominated by pitching with the North getting just three hits to the South's five.

Kinston earned a bye in the first round of the Carolina League playoffs by winning both halves of the season. In the best of five championship round, Kinston faced the Northern Division champs, the Lynchburg Red Sox. They took the series three games to two by shutting down the Red Sox hitting. In the series, Kinston pitchers had a 1.77 ERA and kept Lynchburg hitters to a .195 batting average. Greg McMichael captured two of the three victories with a 1.38 ERA in 13 innings. It was the first Carolina League championship for a Kinston team since Steve Blass and Frank Bork led the Pirates affiliated Kinston Eagles to the crown in 1962.

The championship round featured a near no-hitter. Lynchburg was one out away from the playoff gem and winning 4-0 in the bottom of the ninth inning when Mark Pike laid down a bunt single to break up the no-no and advance the runner on first who had walked earlier in the inning. Darryl Landrum then came up and hit a three-run home run. The next hitter, Ray Williamson, worked a full count before being struck out for the Lynchburg victory.

Three Indians were named to the league's Post-Season All-Star team: Ever Magallanes as shortstop, Mike Twardoski as utility infielder, and Mike Westbrook as utility outfielder. Kevin Bearse was named Carolina League co-Pitcher of the Year with Durham's Kent Mercker.

The KTribe awarded its Tex Drake Award, its prize for the player who overcame adversity during the season, to Jim Richardson who played through nagging injuries throughout the season. The Pat Crawford MVP Award was shared by Mike Twardoski and Kevin Bearse. The Lewis B. McAvery Award for "outstanding contribution to professional baseball in Kinston" went to head groundskeeper Truman Skinner. The Steve Gaydek Award for sportsmanship was given to Ever Magallanes.

Kinston's attendance for the year was 80,623 which was an increase of some twelve thousand from 1987. The front office raised individual ticket prices twenty-five cents to $3.00 for reserve seats and kept the price at $2.50 for general admission. Season ticket packages were set at $150 for reserve box seats, $125 for reserve grandstand (both up $25), and $110 for genral admission (up $20).

Every game was broadcast on country station WFTC 960AM. The team's exploits were reported each day in the Kinston Free Press.

Of the forty-two men who played for the 1988 Kinston Indians, nine have since played in the majors. As mentioned above, Rod Nichols was called up to Cleveland before the end of the season. Joey Belle and Steve Olin made the show the following summer while Beau Allred was a 1989 September call-up. During 1990, Kevin Bearse and Jeff Shaw made it to Cleveland. Ever Magallanes and Jeff Mutis got their shot with Cleveland in 1991. Greg McMichael had the longest wait and was the only one of the nine who did not debut with the Indians making the show with the Atlanta Braves in 1993.

By far, the most successful of the nine players in the major leagues was Belle who went by Albert during most of his time in the bigs. Belle lasted twelve seasons before injuries forced him to bow out. Along the way, he hit 381 home runs with 1239 runs batted in, made five All-Star teams and, for a time, was the highest paid player in professional baseball. Also notable was Shaw who collected over 200 saves in his twelve year career and led the National League in that category in 1997. McMichael and Nichols were the only ones from the group to capture a World Series championship - both were on the Braves in 1995.

Steve Olin had his promising career cut short when he died in a boating accident. Following the tragedy, Kinston initiated an annual Pitcher of the Year Award named in his honor.