Ray Kuhlman was inducted into the Kinston Professional Baseball Hall of Fame during the team's Hot Stove Banquet. Kuhlman was the former owner of the Kinston franchise while it was a Toronto Blue Jays affiliate. 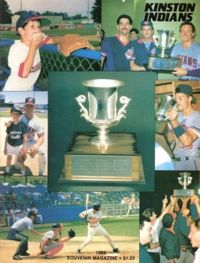 1989 was marked by a lack of stability in the pitching staff. Tony Scaglione was the only pitcher to remain on the roster the entire year. Rudy Seanez was promoted to Triple-A in August and made it to Cleveland as a September call-up - the third year in a row that a KTribe member made it all the way from the Carolina League to the show within a season. Charles Nagy and Tom Kramer were promoted at mid-season. David Oliveras, Angel Ortiz, and Jeff Mutis battled injuries. Kinston's best reliever, Rick Surhoff, was also promoted mid-season.

In the first half, the KTribe was stuck around .500 until May when they got hot. They put together a ten game winning streak starting with a doubleheader sweep of the Durham Bulls. But, they were unable to catch them in the standings, and the Bulls finished off the half with a 3.5 game advantage over Kinston. Jim Bruske was the most consistent player in the first half but was promoted just before the break. Jim Richardson was a fielding standout at third.

The All-Star Game in Durham on July 18 had a strong Kinston representation. Rudy Seanez had the honor of starting the mid-season classic and Tony Scaglione was the winning pitcher. Ramon Bautista drove in the winning run and Mark Lewis was named the game "Star of Stars" (MVP) as the Southern Division won 2-1 over the North.

Kinston started the second half 10-1. By mid-July, Durham had closed the gap to one game. By the end of the month, the Bulls had pulled ahead and held onto the lead through the end of the season. The Indians finished a frustrating 3.5 games behind again. One notable game in the second half was the August 18 contest against the co-op Peninsula Pilots. Koichi Ogata, on loan from the Hiroshima Toyo Carp, stole five bases in the game which is still the Carolina League record for a single game.

The big news for the team came off the playing field. Owner Stuart Revo decided to get out of the baseball business and divested himself of the KTribe as well as his teams in Charleston, South Carolina, Williamsport, Pennsylvania, and Miami, Florida. The Kinston franchise was sold for seven hundred fifty thousand dollars to The Kinston Group whose principal owners were Wiley A. "Tuck" Tucker and Jim Thomas. Tucker and Thomas were absentee owners who lived in Atlanta and left the running of the club to General Manager North Johnson. The sale of the team was approved by the league during the All-Star break in July.

Kinston did not qualify for the Carolina League playoffs by coming in second to the Durham Bulls during both halves of the season.

The KTribe awarded its Tex Drake Award, its prize for the player who overcame adversity during the season, to Jeff Mutis who overcame elbow trouble. The Pat Crawford MVP Award was won by Mark Lewis. The Lewis B. McAvery Award for "outstanding contribution to professional baseball in Kinston" went Roger McDaniel who was known for helping with any task needed by the club including helping find housing for players, working in concessions, and maintaining the scoreboard. The Steve Gaydek Award for sportsmanship was given to Daren Epley who was involved in youth baseball clinics while he was in Kinston.

Kinston's attendance for the year was 88,154 which was an increase of some eight thousand from 1988. Attendance was up across the league as the circuit's numbers went over one million fans for the first time since 1947 despite co-op Peninsula drawing just twenty thousand. The front office raised individual ticket prices fifty cents to $3.50 for reserve seats and kept the price at $2.50 for general admission. Season ticket packages stayed the same and were set at $150 for reserve box seats, $125 for reserve grandstand, and $110 for genral admission.

Every game was broadcast on country station WFTC 960AM. The team's exploits were reported each day in the Kinston Free Press.

Of the forty-five men who played for the 1989 Kinston Indians, eleven have since played in the majors. As mentioned above, Rudy Seanez was called up to Cleveland before the end of the season. Charles Nagy made the show the following summer. During 1991, Garland Kiser, Tom Kramer, Jeff Mutis, and Mark Lewis all made it to Cleveland while Doug Piatt was called up to the Expos. Jesse Levis got his shot with Cleveland and Keith Shepherd was a September call-up for the Phillies in 1992. Jim Bruske did not reach the majors until 1995 with the Los Angeles Dodgers, but Ken Ramos had the longest wait making the show with the Houston Astros in 1997.

One other player, Rick Surhoff, had been in the majors prior to joining the KTribe. He had been with the Phillies and Rangers in 1985 and was trying to fight his way back up there through Kinston. Unfortunately, he never reached the majors again, but his brother B.J. did have a successful major league career. Surhoff was the first player with major league experience to play for the KTribe.

The most successful of the eleven players in the major leagues was Nagy. He lasted fourteen seasons. Along the way, he won 129 big league games and made three All-Star teams. Also notable was Seanez who spent seventeen seasons in the majors without making a single start. While in the show, Rudy collected 41 wins and 12 saves. He was also on the World Series champion 2008 Phillies. Bruske also won a championship. His came with the 1998 New York Yankees.