Grainger Stadium in Kinston, NC, is the home of the Down East Wood Ducks, the Texas Rangers’ Low-A East farm team.

In 2015, the Rangers asked Kinston to renovate Grainger, which opened in 1949, to host their Class A-Advanced farm club by 2017. Desperate to escape windy Adelanto, CA, they had bought the Wilmington Blue Rocks – contingent on the sale of the Binghamton Mets to replace the Rocks in Delaware. When the B-Mets reneged on that deal, the Rangers reassured worried Kinston leadership that a team was still on the way and on the same time schedule. Plan B unfolded in due course: The Rangers bought their Adelanto affiliate, the Houston Astros bought the Bakersfield Blaze, and both farm teams were contracted from the California League in order to allow the Carolina League to expand by two teams.

Farming magnate Jesse Willis Grainger donated half the cost of the ballpark site shortly before it was built. Grainger made a similar donation to rebuild a high school that was then also named for him.

The stadium is located at 400 East Grainger Avenue in Kinston. The original structure was built by architect John J. Rowland at a cost of $170,000 inclusive of everything except the land. Of this sum, $150,000 was raised by bond issue. The stadium is owned by the city and leased by the team. A dedicatory plaque identifies the structure as "Municipal Stadium," but it has been called Grainger Stadium since it was first built. Recent ownership has begun to refer to it as "Historic Grainger Stadium" due to its age relative to other fields in the Carolina League. It ended the Affiliated Era as the second oldest stadium in the Carolina League, behind the one that opened in 1939 as Lynchburg City Stadium.

Grainger Stadium was featured in Baseball America's 2011 Great Parks Calendar as the park for the month of August. It underwent thorough renovation between the departure of the Kinston Indians after the 2011 season and the arrival of the Down East Wood Ducks in 2017.

The field itself has dimensions of 335 feet down the left and right field lines, and 390 feet to straightaway center field. The Grainger Stadium field of play has been considered by many in baseball as one of the best in the country for its level. This is largely due to the efforts of two men, Lewis B. "Mac" McAvery and Tommy Walston. McAvery was the head groundskeeper from 1949 to his death in 1979. In honor of his accomplishments, the team established an annual award in his name to be given to the individual who has done the most to "preserve and enhance" professional baseball in Kinston. Walston was the head groundskeeper through the spring of 2008 when he decided to leave for a job at East Carolina University. He was honored with four Carolina League Groundskeeper of the Year awards as well as the Sportsturf Manager of the Year award for all of Class A baseball in 2003. Walston is also president and founder of the Eastern North Carolina Sportsturf Association. 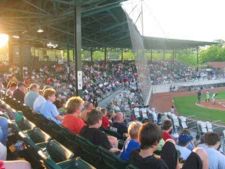 Grainger Stadium currently has a seating capacity of 4,100 which includes a covered grandstand of eight sections partially protected by netting, uncovered metal bleachers down the third base line, and several rows of uncovered seating along the first base line. There is also a picnic area with tables that have a full view of the playing field. Box seats stretch from first to third base just in front of the grandstand. With the exception of the metal bleachers, all seats in Grainger Stadium are formed plastic. The box seats are squared off sections bordered by metal piping with plastic folding chairs and have waitresses assigned to them. The closest seating is mere inches from the playing field while the furthest seats in the top row of the grandstand sit fifty-two feet, four inches from the action. During the days of segregation, section one of the grandstand and a now removed set of metal bleachers that sat adjacent to section one were areas designated for Kinston's black baseball fans. A majority of the supporting structure is brick and steel. Steel beams do cause some partially obstructed views. The roof is wooden, as is the press box. The outfield wall is made of brick with signs of various materials and a wooden batter's eye.

The facility is often used for a variety of events besides minor league baseball. In September of 1979, the USSSA (slow-pitch softball) World Series was held in Grainger Stadium. Two devoted fans who met at a Kinston Indians game decided to tie the knot at the ball park. When longtime scoreboard operator Delmont Miller died in October 2008, his funeral was held in the stadium. On September 30, 2006, Grainger Stadium was the site of the Whole Hog Blues Festival. The facility is often used for regional youth and collegiate baseball tournaments. For example, in May of 2007, the ball park was the site of the 2007 NCAA Division II South Atlantic Regional baseball tournament.

Grainger Stadium has been renovated often through the years to maintain the facility and to try and keep it up to the standards of the more modern structures around the league. At times, these renovations can be quite extensive.

Prior to the 1990 season, sixty new box seats were installed at field level. Seven new boxes with six seats each were placed on the third base side, and three new boxes were installed on the first base side. The concession areas were revamped as well with several being moved to more convenient locations to accommodate lines and a new concession stand being installed in the picnic area. New connections were installed in the beer coolers to allow for multiple kegs to be connected to single outlets to alleviate delays. New restrooms were created on the third base side of the concourse in an area that was once used as the home team clubhouse. The stadium's lighting system was upgraded to conform with new minor league standards. The KTribe clubhouse was given a new coat of paint along with new carpeting and an improved air conditioning system. A new irrigation system was installed for better drainage from the field and a batting cage was placed behind the third base grandstand.

In 1991, the renovations were much more modest. The main upgrade was a new parking lot behind the wall in center and right field. Work on the concession areas that started the year before was also completed. Cosmetic improvements were also made as new flower boxes and shrubbery were added throughout the facility.

The Indians prepared for the 1992 season by revamping Grainger Stadium's sound system. Besides providing clearer "theater quality" sound, the new system also allowed the guys in the booth to experiment with sound effects for the first time. Half-steps were added to the structure's stairs in order to provide easier access. In the outfield, additional lights were installed for greater clarity during night games.

In between the 1992 and 1993 seasons, twenty-five new box seats were installed creating better sightlines, new aluminum bleachers were installed down the left field line, the picnic area on the first base side of the ballpark was enlarged and renamed the Bojangles' Picnic Pavilion, two new concrete light poles were placed in left field. The playing surface was given a crushed brick warning track, and a twenty-four foot tall batter's eye was created in center.

Just prior to the 1994 season, a new 5,800 square foot clubhouse was built with office space, a clubroom, a greatly expanded dressing area, a laundry and storage room, an equipment room, a weight room, a conference room and offices for the manager and coaches. A new entrance way was built for the stadium as well with brick columns and wrought-iron gates. A new roof was installed over the grandstand and much of the stadium was given a new paint job. In addition, the parking lot was also resurfaced.

In January 2007, the Kinston-Lenoir County Tourism Development Authority approved seventy-five thousand dollars to help fund a new scoreboard and video board for Grainger Stadium. The funds will be disbursed in fifteen thousand dollar increments over the next five years, with the first payment being made in July. It was also announced that the City of Kinston would provide $175,000 in additional funds toward the project. The new boards will cost an estimated $350,000 in total.