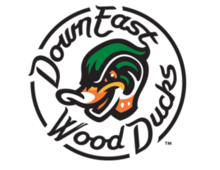 The Down East Wood Ducks, of the Carolina League and briefly in Low-A East, are the only professional sports team east of Interstate 95 in North Carolina - resuming that history after a five-year gap that started in 2012. The Texas Rangers farmhands play their home games at Grainger Stadium in Kinston, NC.

Technically an expansion franchise when they joined the old Carolina circuit in 2017, the Ducks were lowered a level in MLB's 2021 Minor League Reorganization.

After the 2016 season, Minor League Baseball accommodated the Rangers' plan to get out of their affiliation with the California League's High Desert Mavericks by, in effect, moving two clubs from the California League to the Carolina. A second team was necessary to execute the Rangers' plan because leagues who play games every day over a series of days need an even number of teams. The Rangers enlisted the Houston Astros to help, with the Rangers buying the Mavs and the Astros buying the Seattle Mariners-affiliated Bakersfield Blaze. The necessary technical process followed: The Cali contracted those franchises, the Carolina expanded by two, and its new franchises were placed in Kinston, NC, and in Fayetteville, NC - although the latter played its first two seasons elsewhere while awaiting a new stadium.

Kinston's stadium was available for this process after losing its longtime Carolina League club in 2012 as the K-Indians moved to Zebulon, NC.

The Down East name, announced in September 2016, created some local grumbling; Kinston is near but not in Down East, the geographically larger coastal plains area whose name was used to increase the club's appeal. Five nickname choices from a "Name the Team" contest were also announced that month, with the whole moniker announced November 2nd. The also-rans were Eagles - longtime pre-Indians Kinston baseball name - HamHawks, Hogzillas and Shaggers. The Down East Wood Ducks' mascot? DEWD, naturally - pronounced like "dude".

This page is in need of some additional content. Please help the Bullpen by expanding it, or learn how to contribute.
Retrieved from "https://www.baseball-reference.com/bpv/index.php?title=Down_East_Wood_Ducks&oldid=1251374"
Categories: