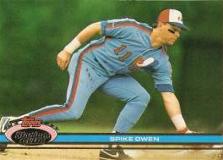 Spike Owen played 13 seasons in the majors, primarily as a shortstop. He never won a Gold Glove, although various of his fielding stats sometimes led the league. Prior to his major league career he was at the University of Texas during the time of Roger Clemens.

He was on Team USA when they won the 1981 World Games and 1981 Intercontinental Cup, beating Cuba for the first time to an international title. The Seattle Mariners drafted Spike in the first round of the 1982 amateur draft (6th pick) on June 7, 1982. He spent the rest of that year in the AA Eastern League with the Lynn Sailors. He produced a .266 batting average with 68 hits in 241 at bats. Spike spent 1983 with the Salt Lake City Gulls where he hit .266 again. He also appeared in 80 games with the major league Mariners managing only a .196 BA but the rookie shortstop fielded at a steady .970 clip. After the season, author Bill James strongly berated the Mariners in the 1984 Baseball Abstract for using Spike regularly as the team's leadoff hitter when he obviously was not ready to take on such a key offensive role at this point of his career. He did improve over the following seasons.

A steady-fielding switch-hitter with little power from either side of the plate, Owen was named captain of the Mariners at the start of the 1986 season and as of 2007 he remains the only team captain in Mariners history. But he was traded to the Boston Red Sox on August 19th that year. In his third game with Boston on August 21st, he tied a major league record with 6 runs in a 24-5 rout of the Cleveland Indians. In the 1986 ALCS in which the Red Sox beat the California Angels, Spike had 9 hits in 21 at bats for a .429 average. Also in the World Series against the New York Mets that the Red Sox lost in 7 games, Owen had 6 hits in 20 at bats for a .300 average.

Owen, along with Dan Gakeler, was traded to the Montreal Expos for John Dopson and Luis Rivera before the 1989 season and became the Expos' starting shortstop. He flourished defensively in Montreal, leading the league in fielding percentage twice and setting the National League record with 61 consecutive errorless games at shortstop, though that record has since been surpassed by Rey Ordonez. He was one of the unsung heroes of the Expos' push for a division title in 1989, when he hit very well from the bottom of the batting order, with an OBP of .381 during the first half, and steadied the whole infield with his solid fielding. The Expos had made do with Hubie Brooks and Rivera at shortstop the previous few seasons, and both were below-average defensively, so the change was quite noticeable. However, he was injured a couple of days into the second half, and did not hit as well after his return as the Expos, in first place until early August, slumped out of contention.

Spike stayed with the Expos team through 1992 and then signed as free agent with the New York Yankees for the 1993 season. Before the 1994 season the Yankees traded Owen, with an unannounced sum of cash, to the California Angels for minor leaguer Jose Musset. Owen played 82 games with the Angels in both 1994 and 1995. He hit an excellent .310, with a .418 OBP, in his first season, but slipped to .229 the second year. His final game was on October 2nd, in the one-game playoff between the Angels and his old team the Mariners; he pinch-hit for Gary Disarcina in the 9th inning with the Angels trailing, 9-1, and flied out to centerfield.

The 35-year-old shortstop appeared in two games for the American Association Oklahoma City 89ers in the Texas Rangers' organization in 1996 and at that time was given his unconditional release.

Owen was a coach for the Round Rock Express from 2002 through 2006 and 2011 to 2014. He was also the interim manager in early June 2011 while Bobby Jones was on the Texas Rangers' coaching staff [1]. Owen got his first full managing job with the High Desert Mavericks in 2015. For 2016, the Rangers originally assigned him to manage the Hickory Crawdads, but only a couple of weeks into spring training, they instead named him interim third base coach for the time Tony Beasley had to undergo chemotherapy. He filled in during the entire season, then when Beasley was set to return to coaching duties in 2017, Owen was appointed as Hickory's manager again.

Owen is the younger brother of former major league infielder Dave Owen. He is one of several major league players named "Spike", with the first one being Spike Brady from 1875. However, in Owen's case, Spike is really his first name rather than a nickname. His name's origin is his mother's last name, which is Spikes.