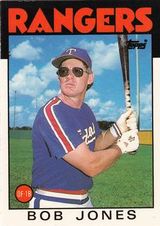 Outfielder Bobby Jones was signed by Washington Senators in 1967. During the Vietnam War, he served in Vietnam from August, 1969 to February, 1971 and became deaf in one ear as the result of a combat injury. He played in the majors with the Texas Rangers in 1974 and 1975 and with the California Angels in 1976 and 1977. In 1979 and 1980, Jones played for the Chunichi Dragons in Nippon Professional Baseball. He returned to the Rangers in 1981 and played with them in parts of five more seasons. In 1989, Jones played for the Fort Myers Sun Sox of the Senior Professional Baseball Association and hit just .183 in 37 games with the club.

Since his playing career ended, Jones has had a long career as a minor league manager in the Rangers organization. He was a member of the Rangers' big league coaching staff in 2000 and 2001 and returned to the majors in 2006 as the team's first base coach. After the 2006 season, Jones returned to the minors as skipper of the Oklahoma RedHawks. On August 13, 2011, he earned his 1,500th victory as a minor league manager when his Round Rock Express defeated the Sacramento RiverCats, 6-3, in a Pacific Coast League game. Every one of those victories had been earned while managing in the Rangers' system.

In 2014, he returned to the Rangers as assistant hitting coach, also staying in the position for the 2015 season. In 2016, he was named the team's instant replay coordinator.