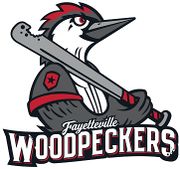 The Fayetteville Woodpeckers, formerly of the Carolina League and now in Low-A East, are owned by their parent Houston Astros. MLB's 2021 Minor League Reorganization lowered them one level.

The club is on its second level and name, and third stadium since 2016. Seeking escape from a windy, pitcher-killing ballpark, the Texas Rangers engineered moving two teams from the California League to the Carolina League in 2017. They bought their affiliate that played in the wind tunnel of a park, the High Desert Mavericks. Concurrently, the Houston Astros bought the Bakersfield Blaze to be the necessary other partner in the dance - necessary because leagues that play nearly every day in series need an even number of teams.

The club played its first two seasons as the Buies Creek Astros, in a rented a college park while Fayetteville built a ballpark. Their colors match the bird's - and also the U.S. Army Special Operations Command's. A temporary stadium at nearby Fort Bragg, NC hosted a July 3, 2016, salute to the military - the Fort Bragg Game; it was the first MLB game ever played in South Carolina, a state full of minor league clubs.