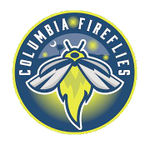 The Columbia Fireflies, formerly of the South Atlantic League and Low-A East, and now in the Carolina League, returned affiliated baseball to Columbia, SC. The Kansas City Royals farmhands play their home games at Segra Park in Columbia, SC.

The Savannah Sand Gnats moved to Columbia after the 2015 season, becoming the Fireflies. In both a homecoming and a once-and-future event, the Gnats-turned-Lightning Bugs started their history as a New York Mets' affiliate - as Columbia's previous ball club, the Capital City Bombers, had ended. The affiliation switch to the Royals resulted from MLB's 2021 Minor League Reorganization.

"Fireflies" salutes a particular species of lightning bug, the Photuris frontalis. About the time baseball season starts, thousands of Phots in Congaree National Park synchronize their flashing for a few weeks. It is the only species of firefly in North America known to do so, and there are only six places in the world where this happens[1].

This page is in need of some additional content. Please help the Bullpen by expanding it, or learn how to contribute.
Retrieved from "https://www.baseball-reference.com/bpv/index.php?title=Columbia_Fireflies&oldid=1224901"
Categories: