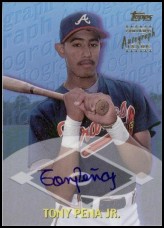 Shortstop Tony Peña is the son of former All-Star catcher and manager Tony Peña. He is the brother of Francisco Peña, cousin of Rudy Peña and nephew of Ramon Peña.

Peña was signed by scout Rene Francisco for the Atlanta Braves in 1999. He made his pro debut with the Danville Braves in 2000. Peña made his big league debut with the Braves in 2006. As a member of the Kansas City Royals, Tony earned the nickname "trips" after hitting two triples on opening day and finishing April with four.

Peña batted .429/.429/.571 with 5 RBI in the 2008 Caribbean Series and made the Series All-Star team at shortstop but led the Series with four errors, helping cost the Águilas Cibaeñas the title.

Peña struggled mightily with the bat in 2008, when he hit .169 with an OPS+ of 7, and in 2009, when he fell to .098. Released by the Royals, he decided to try his hand at pitching. He had made one appearance as a reliever in 2008, and had impressed observers with his velocity. He pitched 10 games with a 2.33 ERA in the minors in 2009, then was signed as a full-time reliever by the San Francisco Giants organization in 2010, opening the year with the AA Richmond Flying Squirrels.

Peña became a manager with the AZL Royals in 2018-2019. In 2020 he was scheduled to be bench coach of the Omaha Storm Chasers until June then become manager of the Burlington Royals, however the season was cancelled due to Covid-19. In 2021, he was promoted to the major league Kansas City Royals' coaching staff but stayed only that season. He returned to the minors as manager of the Columbia Fireflies in 2022.

Peña also has experience working in the Dominican League. He served as the third base coach for the Gigantes del Cibao in 2018/2019. In 2019/2020 he joined the Aguilas Cibaeñas as their third base coach, but switched to the Quality Control Coach position in mid-November. Pena Jr. was the bench coach for Águilas in 2020/2021 and 2021/2022.