The Indians started preparing for the upcoming season by revamping Grainger Stadium's sound system. Besides providing clearer "theater quality" sound, the new system also allowed the guys in the booth to experiment with sound effects for the first time. Half-steps were added to the structure's stairs in order to provide easier access. In the outfield, additional lights were installed for greater clarity during night games.

Mike Hargrove was inducted into the Kinston Professional Baseball Hall of Fame during the team's Hot Stove Banquet. Hargrove was the manager of the 1987 Kinston Indians.

The Indians played an exhibition game against ECU on April 8th. 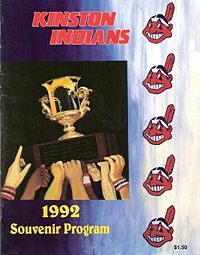 Although the Indians had a down year, especially coming off their 1991 Carolina League Championship, their fans could take some solace in the individual performances of the players. Author Jim L. Sumner put much of the blame for the team's poor showing on "erratic pitching," but much of that can be explained by injuries and promotions. Kinston's closer, Greg McCarthy, had a 0.00 ERA and 12 saves before suffering a season ending arm injury. Chad Ogea gave the K-Tribe 13 victories prior to being called up to AA. While in Canton, Ogea quickly achieved seven more wins to become professional baseball's first twenty game winner of the season. Alan Embree would notch ten wins and 115 strikeouts in 101 innings before being called up.

At the plate, the 1992 squad finished second in the league with a team .255 batting average. A young Manny Ramirez led the charge with 13 HRs and 63 RBI before being sidelined with a wrist injury. Omar Ramirez hit .299 with 13 HRs of his own. The team MVP was Herb Perry who hit .278 with 19 HRs and 77 RBI. The former University of Florida quarterback had his biggest game on July 15th. On that day Perry hit three home runs to give Kinston an 8-3 win over the Durham Bulls. This simultaneously ended a nine game winning streak for the Bulls and a ten game losing streak for the K-Tribe.

In the field, David Bell put in a valiant effort at third base while battling a painful back injury the whole season.

The team made a strong push to secure a post season berth late in the first half but fell two games short despite winning eleven of their last twelve games. August brought "monsoon like" rains that washed out four straight games and seemed to symbolize a washed out season.

At the All-Star Game in Salem on July 22nd, Omar Ramirez was Kinston's lone representative on the Southern Division squad. In the game, the North scored three runs in the second inning, and the South was never able to recover. They lost the game 5-2.

Failing to win their division in either half of the season cost the K-Tribe its chance to defend their Carolina League title.

Post season awards were sparse for the sixth place Indians. Truman Skinner did secure Groundskeeper of the Year honors in the Carolina League though.

Darrell Whitmore impressed Florida with his efforts during the year. The newly formed Marlins snatched him up as their eighth pick in the Major League expansion draft.

Kinston's attendance for the year was 105,905 which was a five percent increase over the previous year's total. The front office kept individual ticket prices very reasonable (reserved: $4; GA: $3). They also had attractive season ticket packages available (res.: $145; GA: $130). $900 would buy one season box seats with six chairs in each box.

Not much changed at the concession stands, although the team made much of the fact that they now offered Domino's Pizza.

The team's exploits were reported each day in the Kinston Free Press who still called the team "Kindians" on occassion. This alternative nickname would soon die out in favor of "K-Tribe." All games were broadcast over WRNS AM960. There were also select games broadcast over WJNC 1240AM. One game, the May 3rd Durham Bulls contest, was televised over WRAL.