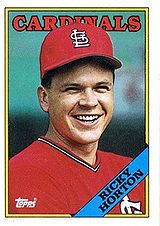 Ricky Horton was signed as a 4th round pick in the 1980 amateur draft by the St. Louis Cardinals and scouts Roland Johnson and Tim Thompson.

Horton pitched his only complete game shutout on June 29, 1984 as a member of the Cardinals against the San Diego Padres. Horton pitched a two-hitter in that game, the only hits were a bottom-of-the-8th double by Kevin McReynolds and a single by Alan Wiggins. The Cardinals won the game, 5-0.

Horton later was the pitching coach of the 1992 Kinston Indians, and currently serves as an occasional broadcaster of Cardinals games.

Horton's brother, David Horton, was a minor league infielder for the St. Louis Cardinals in 1986-1987.